Therazane the Stonemother is the Elemental Lord of earth, and formerly one of the Old Gods' lieutenants. As the ruler of Deepholm and mother of the mighty Stone Lords, she is the master of all earth elementals. She takes the form of a massive female figure made of brown rocks and violet gemstones that are always seen floating just above the ground. Despite her general disinterest in mortal affairs, Therazane has worked with the mortals of Azeroth several times against the Old Gods' forces, having shown nothing but contempt for her former masters and their servants.[2] She also rallied her forces to aid the Earthen Ring during the third invasion of the Burning Legion.[3]

Therazane with the other Elemental Lords.

In the beginning, the world that would become known as Azeroth was ruled by the elementals. A nascent titan maturing within the world's core had consumed much of the fifth element, Spirit, and without this primordial force to create balance, the elements were thrown into chaos. The four Elemental Lords, who each ruled over innumerable lesser spirits, constantly clashed with one another on the surface of the primordial world. Therazane the Stonemother was the most reclusive of the elemental rulers, raising great mountain ranges to protect her children from her enemies' assaults. Only after they had worn themselves thin against her barriers would the Stonemother emerge, wrenching open giant chasms to swallow entire elemental armies whole and sending her most powerful servants, giants of crystal and stone, to crush those who survived.[4]

When the entities known as the Old Gods arrived from the Great Dark and established their empire, the Elemental Lords saw the invaders as a threat to their dominion. For the first time in Azeroth's history, the native spirits of the world worked together against a common enemy. Therazane raised walls of jagged rock to corral and shatter the temple cities of the Black Empire, before Neptulon would sweep in with his minions and crush the Old Gods' forces with tidal waves.[4] Ultimately, however, they were overwhelmed by the endless armies of the Old Gods and enslaved to their malign will.

When the titan-forged arrived on Azeroth to battle the Black Empire, the Old Gods sent their enslaved Elemental Lord lieutenants to face them. Archaedas and Freya were charged with facing the Stonemother, who retreated into her towering stone spire. Archaedas used his earth magic to weaken the tower's foundations and destroy the giants guarding it, before Freya called up enormous roots to entangle and destroy the spire, bringing it down upon the Stonemother's head. Therazane and her children were thereafter imprisoned in the crystalline caverns of Deepholm, a region of the Elemental Plane.[4] 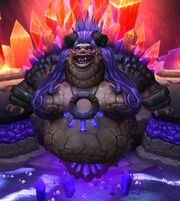 Therazane in World of Warcraft.

After witnessing the devastation Deathwing and his followers caused her realm, Therazane treats all outsiders with open hostility.

Therazane, also known as the Stonemother, is the elemental lord of earth, an ancient and immensely powerful counterpart of Ragnaros, Al'Akir, and Neptulon. Unlike the realms of Al'Akir and Ragnaros, however, her domain - that of the earth, rock, and mountains - has put her in immediate conflict with Deathwing, whose emergence from Deepholm has pushed her stony realm to the point of collapse.

Though Therazane has no love for mortals, she recognizes the role that these races might play in restoring Deepholm and evicting the Twilight's Hammer, who have flocked to her kingdom to bask in the glory of Deathwing's former sanctum. Heroes who seek the aid of the Stonemother will find that her favor can confer many blessings; among them are powerful augmenting stones borne up from Deepholm itself to strengthen the armor of those who serve Therazane's will.[5]

Therazane is a quest giver in Deepholm, residing at Therazane's Throne. Her questline is in a similar experience to the Sons of Hodir's questline in Storm Peaks.[6] While she offers quests to adventurers in Deepholm, Therazane makes it clear she has no love for the mortals who killed Princess Theradras, and warns those who speak to her that they will eventually outlive their usefulness.

After the heroes convinced Therazane that they will indeed leave Deepholm once the World Pillar has been repaired, a battle takes place between the Twilight Cultists and Therazane's forces. Therazane picks out the most dangerous foes, smashing them into pieces before moving on to the next. Ultimately with the help of the elementals of the earth, the World Pillar is repaired.

When Thrall's spirit became bound to the earth of Deepholm players along with Aggra visit Therazane to gain her blessing in searching for him. Though she finds Thrall's spirit fascinating and is at first unwilling to part with him she states she can still hear the cry of a lover's heart and that she has not forgotten what it was to love. She grants her blessing to Aggra and the player but warns that even with it Thrall himself may not wish to leave.[7]

In order to rally the Elemental Lords against the Burning Legion, the Earthen Ring travels to Deepholm. Therazane and her forces are under attack by the remaining Twilight's Hammer, which is rallying an army to conquer her realm, and Therazane cannot offer her aid until the threat has been dealt with.[8] The forces led by Sintharia's spirit[9] are defeated, and Therazane pledges to fight alongside the Earthen Ring. She sends Avalanchion to join the shamans at the Heart of Azeroth.[10]

When the four Elemental Lords were united under the banner of the Earthen Ring against the Burning Legion, Therazane joined Neptulon, Smolderon, and Thunderaan to commemorate this occasion.

Therazane was not initially aware of what the Legion or demons even were.[11] This makes sense when one considers that she was locked in Deepholm long before the War of the Ancients, the demons' first time on Azeroth.

During the assault on the Broken Shore by the Armies of Legionfall, Therazane joined the Farseer, Magatha Grimtotem, and Smolderon to take vengeance on the demons twisting Azeroth's earth.

Therazane seems to greatly favor the Farseer, referring to them affectionately as her "new favorite fleshling" and a "true friend of the Earthmother."[12]

After a blacksmith adventurer and Ormhun Stonehammer created a Khazgorian Anvil, Therazane appeared and captured both the anvil and Ormhun, voicing great displeasure that Ormhun would share such secrets with outsiders. She also demanded what the adventurer had to say for their self in the matter.[13] 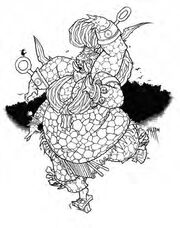 Therazane is a monstrous humanoid covered with stones, earth, and clinging plants. She has squat legs and four powerful arms. Her unblinking eyes of gold-flecked agate look out into the world from her one head, but there are two other faces to be seen as well.

Therazane the Stonemother is ruler over the earth, dirt, rock, and mountains. She is revered by all earth elementals and creatures that dwell underneath the ground. Some druids of the wild see her as the embodiment of all that is peaceful and calm about the world. Some sages believe she feels pain whenever the ground is sundered and weeps at the destruction wrought by Deathwing and his ilk. If so, however, she has done nothing specific to oppose the great dragon. Therazane is the most peaceful of the Elemental Lords. She is a patient, loving, motherly type who encourages growing things and loves simply to spend long periods of time relaxing with those creatures that make their homes upon her. She often feels as though she is always at war with the other Elemental Lords: Al'Akir erodes her surface with winds, Neptulon beats his waves constantly upon her shores, and Ragnaros is a blazing furnace that churns at her fiery core. She would be perfectly happy if the three of them would just go away. Therazane is slow to anger and attempts to avoid combat whenever possible. If roused to battle, however, she can be a fearsome, powerful opponent. She typically drives toward the most dangerous foe, smashing her target into tiny red pieces before moving on to the next. Should she be seriously challenged, she simply sinks into the earth and retreats.[16]

As you watch, the earth ahead seems to rise up, forming into a monstrous humanoid covered with stones, earth, and clinging plants. It has squat legs and four powerful arms, and the suggestion of large, saggy breasts and wide hips indicate that this creature is undeniably female. Unblinking eyes of gold-flecked agate stare at you from a face that seems curious, inquisitive… and you see what appear to be two other faces beside the one that regards you now, one of anger and fury, the other of perhaps sorrow and longing.[17]

In Cataclysm, she appears as a spherical, obese, floating woman with only one visible face and only two arms. Two vestigial legs hang beneath her, treading the air. Like her daughter, she uses her hair to cover her breasts. A number of purple crystals grow on her, and some are also used by her as jewelry.

Gossip while exalted with Therazane faction.

<The Stonemother stares down at you. Through you. As if she's peering into your soul.>

My daughter, Theradras, sequestered herself deep within the Crystal Caverns of Terramok to grieve for her lost love, Zaetar. There, heartless, stoneless beings invaded and slaughtered her amidst her mourning.

If I had any reason to trust a creature afflicted by the curse of flesh, it was stripped from me that day. And yet in your arrogance, you persist.

One day, you will outlive your usefulness.

Troubles on the surface don't belong down here, shaman. I hope you intend to put this right.