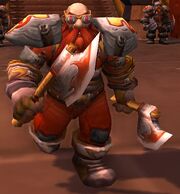 Thief Catchers are three named elite Alliance guards in Ironforge that patrol the city. They can detect stealthed enemies and upon discovering one, will attack it, alerting the city to its presence. Their patrol is on a set route that takes them throughout a majority of the city.

If a player zooms in on one of these NPC's as they pass, a pair of

[Catseye Ultra Goggles] is clearly visible being worn on their heads — most likely to aid in their stealth detection capabilities.

They are probably a sub-division of the Ironforge Guard.