In World of Warcraft, the gigantic wall is heavily damaged. In the Escape from Durnholde Keep instance of the Caverns of Time, the wall is in considerably better condition, but still quite a bit damaged.

Soon after establishment of the kingdom of Arathor and its capital Strom, King Thoradin ordered to build a great wall near the capital to shield humanity from the Amani incursions.[1]

Many centuries later, the wall was still standing but heavily damaged and in ruins.

After Galen Trollbane was raised as an undead by the Forsaken, a camp was built near the wall where Galen would request the aid of Horde adventurers to retrieve Trol'kalar.

Please add any available information to this section.
During the Gathering, Sylvanas Windrunner and her dark rangers were stationed at the wall as agreed by the warchief and King Anduin Wrynn.[2]

A battle was fought here between the Horde and the Alliance.[3] 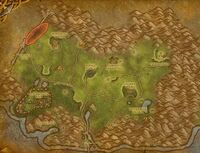 A dwarf archaeology dig site follows the northern stretch of the wall on the Arathi Highlands side to just north of Galen's Fall.

Thoradin's Wall, an immense edifice on the northern border, was once a symbol of humanity's strength and defensive might. Now, the wall has fallen to decay and war, and it is collapsed and gaping wide.[4]