For the encounter in Ulduar, see Thorim (tactics).

Thorim is one of the titan-forged keepers. He was betrayed and subdued by his brother Loken as part of a plot to free Yogg-Saron. Kept captive within Ulduar with the other keepers, he was freed by adventurers and participated in the Old God's defeat.

Thorim was one of the Keepers created by the Pantheon to lead the titan-forged armies against the forces of the Old Gods. Thorim was imbued with power by Golganneth. Together with Hodir and Ra, he battled and defeated Al'Akir the Windlord.[3]

Thorim served the titans as guardian of Ulduar and the Terrace of the Makers, and protecting the pacts between the races of frost. Mimiron, devised the Thunderspark that powers the Titanstrike for his comrade Keeper Thorim in ages past.[4]

After betraying the Pantheon, Thorim's brother Loken tricked him into betraying his frost giant allies by murdering his wife, Sif, and blaming it on the ice giant king. Thorim was enraged, striking out at his allies and then settling into a long stupor.

Many years later, Thorim discovered the truth. With the aid of adventurers serving the Sons of Hodir, Thorim recovered his weapon and his armor, then brought war to his treacherous brother. However, it proved to be an elaborate ruse perpetrated by Loken to lure Thorim away from the Temple of Storms, where proximity to his dark master granted him the power to overcome Thorim's attack. Thorim and his proto-drake, Veranus, were captured and taken to "new dwellings".

Thorim's power is said to have been invoked once, and that it turned a whole continent into dust.[5] 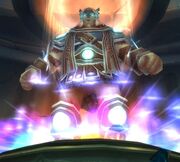 Loken had Thorim taken to Ulduar along with his proto-drake, Veranus (transformed into the plated monstrosity Razorscale), where he was corrupted and brought under the sway of Yogg-Saron. Defeating him in Ulduar breaks Yogg-Saron's spell, and Thorim agrees to aid the adventurers who freed him during the final battle against Yogg-Saron. Thorim first appears as a boss within Ulduar. After defeating him, he breaks from of Yogg-Saron's corruption and aids you in the battle against the Old God. When active, Thorim provides the following buffs: 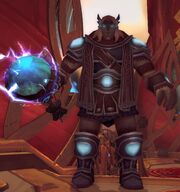 Titanstrike, a gun Mimiron had created for his companion Thorim long ago, was at some point stolen from Ulduar and brought to Shield's Rest on the Broken Isles. During the invasion of the Burning Legion, the gun was stolen again by a vrykul woman named Prustaga, who intended to retrieve the

[Thunderspark] within and gain the power of the Titans. Prustaga and vrykul who served her attacked Thorim at the Temple of Storms with the goal of freeing her people from the Keepers' judgment. Thorim, along with Mimiron, Grif Wildheart (whom Thorim mistook as Brann Bronzebeard), and a hunter Thorim recognized as one of the heroes who freed him from Yogg-Saron, battled Prustaga as she was empowered by the

Hati, one of Thorim's pet wolves (the other being Skoll, whom Thorim had lost track of), attacked Prustaga as the Thunderspark's power overwhelmed her and absorbed the electrical energy within. To prevent Hati's death, the hunter bonded their soul with the beast. Thorim then asked the hunter to wield Titanstrike with Hati at their side.

Some time later, Hymdall sounded the Gjallarhorn, which the keepers of Ulduar were oathbound to answer. However, Thorim reported that they could not as the Burning Legion had invaded Ulduar. Odyn sent his Valarjar to aid the forces of Ulduar. Though Hodir was captured by the Legion, Thorim pledged the forces of Ulduar to aid the Valarjar[6] and later aided them in saving Hodir from the Legion world of Niskara.[7]

His name, title, and location are references to the Norse god Thor. Thorim's hammer (Krolmir) is based on Thor's hammer (Mjolnir) and Thor's wife is also named Sif. During the encounter in Ulduar, a Jormungar Behemoth stands in the arena, probably as a reference to Thor's killer at Ragnarok: The Jörmungandr (whom Thor would slay as well). From the similarity between his name and the metal Thorium there may be some mysterious connection between the two, much in the same way Saronite is considered to have a mystical connection with the Old God Yogg-Saron. However since Thorium is a real metal it may be more doubtful that the designers had any intent to link the two.