Wowpedia
Register
Don't have an account?
Sign In
Advertisement
in: Removed in patch 4.0.3a, Statements needing citations, Classic zones,
and 2 more
English

For the lore of the zone and its status after the Cataclysm, see Thousand Needles.

Thousand Needles (aka The Thousand Needles)[1] is a huge dry canyon in Southern Kalimdor, filled with towering mesas. In the east, the canyon opens up to the Shimmering Flats, a vast salt pan that is used by Goblin and Gnomish engineers for their races. Despite being relatively barren, the area has its own harsh beauty, and the sunrise seen from either Freewind Post or one of the mesas around Darkcloud Pinnacle can be spectacular. The Shimmering Flats and Mirage Raceway are also worth visiting for their surreal, lonely atmosphere.

Although as a contested territory this area doesn't see anywhere near as much action as some, Darkcloud Pinnacle is a favorite stealth ganking spot for Alliance rogues due to the many Horde quests there as well as the relative difficulty of the mobs/remoteness of that location. The Alliance also tend to attack the Great Lift and Freewind Post fairly regularly. In addition, players questing on the Shimmering Flats near the Tanaris border are advised to look over their shoulder from time to time, as the unwary can occasionally find themselves being stabbed in the back by a passing member of the opposing faction.

Before the great Sundering, the region of Thousand Needles was a river canyon, the spires of sandstone shaped from years of rushing water. Water flowed to the sea from a large lake to the east, fed by an underground tributary. Then came the demons and the destruction that threw the entire world into upheaval. The canyon was thrust above the water table; the eastern lake dried into a vast salt flat and Thousand Needles became a sandy gorge. Thousand Needles rises south of Dustwallow Marsh and serves as a channel to Desolace to the west or the Tanaris Desert to the South.[1] It also connects to Feralas. The long canyon stands as a natural divide between central and southern Kalimdor. The realm gets its name from the dozens of giant, cylindrical columns of sandstone that rise from the bottom of the canyon like a forest. Bridges have been constructed atop many of the spires, connecting pathways across the canyon from one side of the surrounding mountains to the other. To the east of Thousand Needles, the canyon opens into a large, dry lakebed. This dried-out salt flat is actually below sea level. At its center stands an alkaline lake with ten times the salt of any ocean. The sere region is so hot, dry and salty that few creatures venture here. Lizards, scorpions, vultures, and birds of prey are not uncommon and neither are centaur war bands. A contingent of goblins mines for oil in the Scorched Basin. The spire bridges allow travelers to traverse the canyon without running into the barbaric centaur who patrol the canyon floor. The bridges are not entirely safe, however, as birds of prey will attack the unwary. Larger birds have even sabotaged the bridges from time to time. There is very little of interest in this land, unless someone has a passion for salt or sandstone... or oil.[1]

The barren canyons of Thousand Needles have traditionally been the territory of several Tauren tribes. The Tauren were forced to live precariously on the tips of the high mesas in order to avoid the large tribes of Centaur that almost wiped them out. Now, with the help of the Horde, the tauren are fighting back against their enemies, including the fanatical Grimtotem Tribe. The Shimmering Flats to the southeast are also the home of the world famous Mirage Racetrack, where gnomes and goblins race their respective rocket cars in order to permanently settle the question of which race has better engineering.

It is suspected that ages ago Thousand Needles was once a small inland sea, or perhaps even an inlet of the Great Sea. This explains the salt flat as well as why there are so many "needle"-like mesas (once possibly islands). The cause for the sea's evaporation could be attributed to the sundering, which tore the ancient Kalimdor cleanly in two. A catastrophe such as this could easily have caused climate change.

Another theory states that a river with its source in Feralas, possibly Wildwind Lake, flowed into the area that would become Thousand Needles. The river cut through the earth, carving the canyon and shaping the dramatic pinnacles that became the Thousand Needles. It was a verdant, forested land. The river emptied into a large inland sea in the east. When the Great Sundering occurred, the course of the river was altered and ceased to flow through what would become Thousand Needles. The forests died and the fertile soil became orange dust. The inland sea, without its source of water, evaporated, leaving behind a vast salt flat.

It has also been thought by Falfindel Waywarder of Thalanaar that dark magic of some kind blighted the land.

Alliance
Alliance characters will first reach Thousand Needles from the north. The traveler can either take a boat to Theramore Isle in Dustwallow Marsh or flying to Mudsprocket, run west to the Barrens, then south to the Great Lift (avoiding its Horde guards) and into Thousand Needles; or head south from Ratchet in the Barrens (Ratchet can be reached either by boat from Booty Bay or by running south from Ashenvale). The route from Theramore or Mudsprocket is faster but much more dangerous, as Dustwallow Marsh is a 35-45 level zone.

Horde
From Camp Taurajo in the Barrens, head south along the road to the Great Lift and down into Thousand Needles. 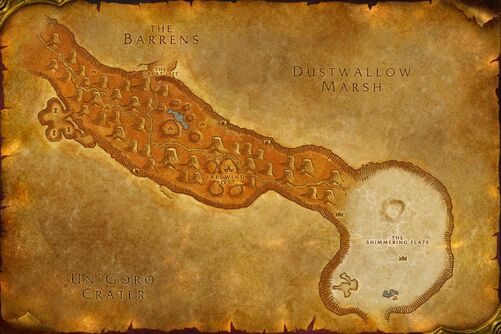 There is only one flight path in Thousand Needles, and that is Horde-aligned Freewind Post. However, Alliance travelers can use the nearby Thalanaar flight path to the west, and the flight path in neutral Gadgetzan to the south to navigate the zone.

The Thousand Needles are home to several characters of note. At Freewind Post, Cliffwatcher Longhorn seeks aid in the battle against the evil Grimtotem Clan. At the Weathered Nook, Dorn Plainstalker attempts to teach members of the Horde about Faith, Endurance, and Strength. And at the Mirage Raceway, Kravel Koalbeard sends bold adventurers around the world in search items that will give him personal gain in his bets at the gnome and goblin races.

Horde quests in Thousand Needles begin around level 25 and go through level 35. Neutral quests at the Shimmering Flats begin around level 30 and continue to level 35. Some of the neutral quests that send players out of the zone continue all the way up to level 45. Notable quest chains include Goblin Sponsorship and Errands for Kravel, both neutral and available at the Mirage Raceway.

Patch 0.10 (2004-09-18): Has had more quests and zone rework done. Horde players should find this a much healthier alternative to Hillsbrad Foothills to explore and do more quests.