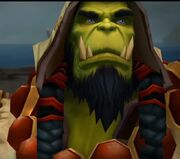 Thrall and his balls.
(Disclaimer: May not be Thrall's actual balls.)

[81] Blood and Thunder!, during which he yells: Thrall's balls! They're everywhere...