Wowpedia
Register
Don't have an account?
Sign In
Advertisement
in: The Pride of Kul Tiras quests, Alliance quests, Quests at 50,
and 4 more

If the legends are true then inside we will witness suffering and torment the likes of which we have never known...

...but if that is what I must endure to right what I have wronged, then I will cross that threshold gladly.

I'm with you, champion.

Words cannot express the debt I owe you for helping return my daughter to me, but unfortunately the traitor Ashvane has left us no time for celebration.

A vision of Jaina as a child appears:

You come across several Kul Tiran Captives, victims of the Heartsbane Coven, hanging from their wrists against large runestones.
Katherine Proudmoore says: Poor souls... no one should endure this. After we save Jaina, we must find a way to come back for them.

The Servant of Thros defeated:

Servant of Thros yells: Thros... will consume you...
Katherine Proudmoore says: Jaina is just ahead. We must hurry! 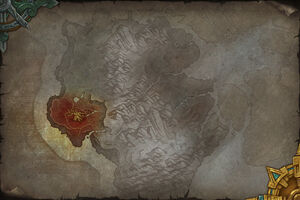 Jaina is surrounded by Theramore Citizens:

They turn hostile. Defeat them, then interact with Jaina:

on the way north, you will find the corpses of five Kul Tiran Captives on the road.

Katherine Proudmoore says: Clearly the Drust have no interest in keeping their prisoners alive. We cannot let this fate befall Jaina.

Rhonin and two Kirin Tor Invokers are dressing Jaina down:

Rhonin says: You let your personal biases taint the Kirin Tor!
Rhonin says: I was a fool to think you could be our leader!
Jaina says: But... they lied to me...

Interact with the echo:

in a hollow, King Varian Wrynn is staring Jaina down:

Interact with Jaina to continue.

Stage 4: Into the Mirror

Daelin Proudmoore yells: You will be next!
Blighted Deciever says: You are... too late...
Katherine Proudmoore says: Jaina? Is it really you?

Interact with her and a cinematic plays, the Realm of Torment:

Defeat Gorak Tul and escape from the Blighted Lands.

I can teleport us out of here when you are ready, <class>.
Please hurry, I wish to be rid of this place.

Lady Jaina Proudmoore says: Very well. Come, mother. Time to go home.
Jaina teleports herself, her mother, and the adventurer out of Thros.

[The Pride of Kul Tiras]" achievement, but the storyline continues with