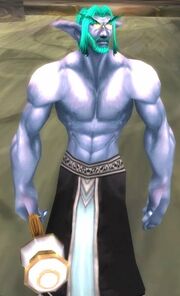 Thundris as he was in life.

Thundris Windweaver was a night elf quest giver located in Auberdine in Darkshore. He was a well-respected citizen of the town and an old friend of Huntress Kella Nightbow.[1] He graciously served as the elder of Auberdine, offering sage and just stewardship of the day to day affairs of the village.[2]

At some point, the blacksmith Jordan Stilwell was helping Thundris with something.[3] The human didn't strike him as an impudent man.[4]

Observing the ruins of Bashal'Aran, Thundris noticed a shrine with a strange blue aura. Later, he sent Alliance adventurers to find the source of the aura in the ruins, overrun with demonic minions who fed on the magical energies there, but avoided the shrine.[5]

Sentinels told him about the spirits of the Highborne persisting in the ruins of Ameth'Aran who also wielded their ancient magical implements. Thundris sent adventurers to the ruins to recover the Highborne Relic, intending to have them appropriated and destroyed. As soon as he was handled them, he felt as if he could almost feel the taint of foul Highborne magic upon them, though he considered it a figment of his imagination. As a thanks, he casted a druid spell to briefly empower the adventurer.[6]

After Terenthis assessed the threat of the Blackwood furbolgs, he sent them to Thundris who was dealing not only with the forest dwellers, but also with their corruption.[2] As the Cliffspring River began turning foul and corrupted, Thundris feared the wash would affect Auberdine. He suspected the Blackwood furbolgs up-river were the cause of the taint, and that they weren't the true root of it. As such, he gave adventurers a sampling tube in order to draw a sample from a waterfall pool in the north. He hoped the sample would help the elves formalize a plan of attack, as well as to confirm the source of corruption being from Felwood, one that he has seen in the past. He also hoped Auberdine would be able to enact a cure for it.[7]

With the source of the furbolgs' corruption being confirmed as coming from the satyrs, he sent adventurers to fill a bowl at their moonwell and take samples of the furbolgs' food from their northern camp. After mixing them, furbolgs were cleansed just long enough to lure out the satyr corruptor, Xabraxxis. After the satyr was killed, adventurers took his Talisman of Corruption, responsible for the plight of the furbolgs, to Thundris in order to dispose of it.[8]

In Jordan Stilwell's stead, an Alliance paladin asked Thundris for a Kor gem. The elf directed the adventurer to find the naga in Blackfathom Deeps. Once in his possession, Thundris was able to purify Corrupted Kor Gems for the blacksmith.[4]

Following the events on the Azuremyst Isles, he was visited by a draenei adventurer sent by Kella. He promised them to send aid to Anchorite Paetheus after speaking with townspeople and the Sentinels.[1]

When the Cataclysm struck and Auberdine was ruined, he was killed by cultists of the Twilight's Hammer.

Yalda sent Alliance adventurers to coax his spirit. His spirit is then released in the form of a wisp.[10]

Thundris Windweaver is a friendly druid who runs day-today activities of Auberdine as its ruler.[11]