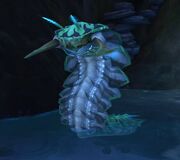 A tidal guardian in World of Warcraft. 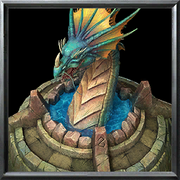 Tidal guardians are tamable by hunters as part of the serpent family.

Tube wyrms, or tubeworms,[1] are serpent-like creatures that live on the ocean floor, a type of sea serpent.[2] A thick, emerald-colored hide forms this creature's monstrous body, but countless tiny scales of dark blue and deep purple shades cover its serpentine skin. These form a tough natural armor that shimmers iridescently wherever light shines upon it.

Occasionally, naga capture and train tube wyrms to serve them as defenders (particularly in Nazjatar),[2] though this strategy is not widespread. Naga refer to these tamed tube wyrms as Tidal Guardians. Tube wyrms thrive in heated, sulfur-rich, acidic waters. Heated gas emerges from thermal vents in some areas, and tube wyrms consume this gas and convert it into nutrients. One such area is the Pillar Deep, in the Eye. On first sighting this area, an undersea explorer sees enormous pillars rising from the ocean floor. Closer inspection, however, reveals that these "pillars" are tube wyrms, grown to enormous size in these rich waters. Tube wyrms protect the tubes in which they live and the surrounding area. Some varieties spit acid and/or grapple foes.[3]

They may have inspired later naga worms like Serpentrix. Though feral, it is a similar creature that lives in a series of holes.