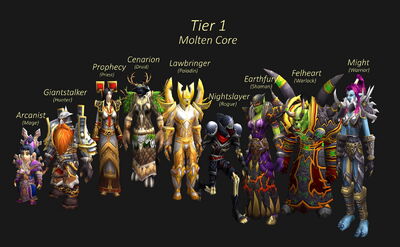 The tier 1 eight-piece epic armor set is found from bosses and trash mobs in the Molten Core. Each set's bracers and belt are Bind on Equip, and thus they can be traded. See Molten Core loot and the individual set articles for more information as to where each piece may drop.

Before patch 1.4, tier 2 also dropped in Molten Core. At the time, the numeric "tier X" nomenclature was not widespread, so the armor sets were generally referred to as "lower tier" and "higher tier". Tier 2 was readded to the game with Blackwing Lair two months later in patch 1.6.

Due to frequent complaints of often looting "useless" druid or warlock gear, Blizzard implemented the "quest loot" concept for raids after Blackwing Lair (starting in patch 1.7 with Zul'Gurub). With quest loot, bosses drop a token limited to three or four classes that would be turned in alongside other reagents and often also requires a high reputation standing with various factions. Quest loot was further refined in Burning Crusade to the "loot token" concept, which did not require completing quests or turning in reagents.