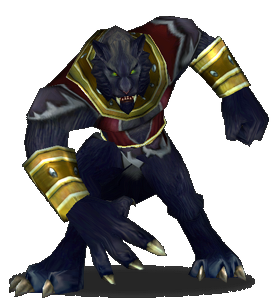 The tigon is a creature resembling a humanoid big cat, so far primarily seen in the form of troll priests taking on the aspect of the feline loa Shirvallah and Bethekk.

By the time of the war against the Iron Horde, troll[1] druids had created a way for all druids to take on a half-cat form like those of Shirvallah's champions through the

[Claws of Shirvallah]. This was later removed from the game.