A true enigma, the Timeless Isle has drifted in and out of Pandaria's mists for hundreds of years.[1][2] Here, time has no meaning, and the sun neither rises nor sets. Its unique characteristics have brought the Isle under the scrutiny of the bronze dragonflight, pandaren explorers, and the black dragon Wrathion.

The Timeless Isle is a level 90 PvE zone located to the east of the Jade Forest. Seek the Isle alone or in a group to collect Timeless Coins (which will allow players to purchase unique gear from the locals) or to do battle with massive creatures and dangerous world bosses. Among the latter are Ordos, the lost Yaungol fire god; and the four August Celestials, who stand ready to test the mettle of adventurers taking part in Wrathion's legendary quest.

While there are quest-givers on the Timeless Isle, they are not there to give specific directions; they encourage players to simply throw themselves into the experience, collecting coins and reacting to the dynamic events, bosses, and puzzles that emerge from the depths of the isle’s unexplored interior...

The Timeless Isle, so named because it exists in a state of perpetual sunset, was once a place of great reverence for the pandaren. It was here that trials of wisdom, hope, strength, and fortitude took place in front of the great Celestials... where warriors and aspiring leaders would show their willingness to walk in the footsteps of the great Emperor, Shaohao. As a testament to their goal of achieving balance in all things, the pandaren monks even existed in harmony with the nearby Yaungol, worshippers of the fiery demigod Ordos.

But one day, the island vanished. Some scrolls indicate that the Timeless Isle has come and gone throughout history—sometimes just a glimmer in the distance, often appearing in different locations. Some less fortunate adventurers dared step foot on the island during these moments and were just as quickly lost to the Timeways, never to be seen again.

Now—and perhaps only for a moment—the island has returned.[3]

Players are first introduced to the Timeless Isle via the quest

[90] A Flash of Bronze..., which starts automatically upon entering their faction's shrine in the Vale of Eternal Blossoms after arriving at level 90. After meeting up with Chromie outside the entrance to the Seat of Knowledge above Mogu'shan Palace, she starts

[90] Journey to the Timeless Isle and hands players the

[Curious Bronze Timepiece] (Alliance / Horde). The timepiece is a one-time use teleport, sending players directly to the watcher's position on the isle, either at the Tushui Landing for the Alliance or the Huojin Landing for the Horde. At the landing point is a flight path, which can then be used for return trips to the isle.

Under 90, or if you want to get there on your own, from the southeastern tip of Jade Forest (just north of Moonwater Retreat), fly east-southeast over Mistveil Sea through the fatigue waters to reach the island. Even with only 225 skill, players will reach land before the fatigue bar empties.

The Isle is lushly forested, with flora similar to that found in the Jade Forest. The waters of the Ruby Lake are colored a strange reddish hue, possibly due to the ruby crystals found deep within the mountains of the Timeless Isle.[4] Yaungol control the mountainous regions of the island, led by their "fire god" Ordos, while the lowlands are mostly abandoned save for the Celestial Court where many residents of Pandaria have gathered to watch the August Celestial's trials. The Huojin and Tushui pandaren have made landfall and established camps at the western shore, but have been asked by the Celestials to not press further inland.

Regions adjacent to the Timeless Isle

Once you're on the Timeless Isle, it's open-world adventuring at your own pace. There are a couple quests on the island, but they're not going to tell you exactly where to go and what to do. Instead they exist to encourage you to explore caverns, discover underwater grottos, and battle all manner of frightful beasts for great rewards.

The island offers greater challenges as you move away from the serene forest surrounding the temple grounds and into the fiery Ordon Sanctuary, Cavern of Lost Spirits, Croaking Hollow, and other mysterious locales. As this is an open-world experience, everything except the raid bosses is designed to be taken on solo. Being able to take on large creatures by yourself also means that, when the number of people visiting the island dwindles, you'll still be able to bring new characters there and engage with everything it has to offer. While the Elites on the island are standard "group-tap", all of the Rares are "no-tap", so if you see anyone fighting them, even someone from the opposite faction, you can join in and both benefit from bringing it down. Everything on the island also drops something unique. For the easier enemies, it may be consumables that grant you Timeless Coins (see below) or aid you in your adventures into darker places, while tougher enemies can drop epic BoA tokens that can be used to gain Item Level (ilvl) 496 loot, upgrade tokens to gain ilvl 535 gear, Lesser Charms, battle pets, and more.[3]

Those who choose to join the burning ranks of the Ordon, the yaungol followers of Ordos, will have access to the powers of the

[Censer of Eternal Agony]. Using the Censer will flag you for PvP to everyone-even your own faction. Your skin takes on a bright flame effect, showing all around that you've summoned the rage of Ordos and are out for blood. Using the Censer also immediately reduces your health to 10% of its maximum (which you can then heal back up over time), keeping it from becoming a quick ganking device. On PvE realms, the rules of flagging still apply; it won't become open warfare, but players can choose to engage these flagged players if they like. On PvP realms, though, this menacing new threat will certainly be a target for both factions. Finally, when you kill other players while you’re under the effects of the Censer, you'll gain Bloody Coins, a currency that can be exchanged for exclusive rewards.[3]

There are only a handful of quests on the isle:

After that, the isle is largely self-directed:

Note that the Timeless Isle is largely a self-directed experience, which diverges somewhat from our recent practice. You aren't going to find a hub of daily questgivers or NPCs who will assign you specific tasks to complete. There is a ton to do on the Timeless Isle, and countless secrets to discover, so go explore!

Instead are a number of events that occur randomly all over the isle.

Timeless events occur all over the Timeless Isle. These events are varied and include treasure chests guarded with good loot and a healthy amount of Timeless Coins, out-of-the-way treasure chests requiring creative exploring to get to, special spawned mobs, and bosses that will take a group to defeat, among many others. Most non-trivial chests and mobs will drop a timeless armor token or two, which can be turned into an item level 496 epic randomly-enchanted item. 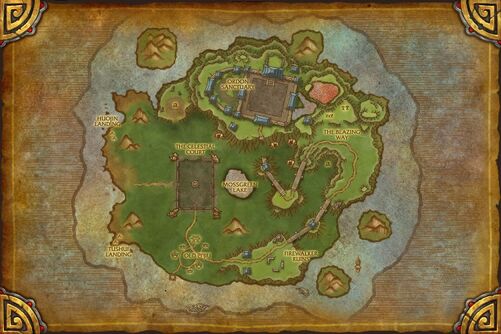 There are a huge number of wild pets on Timeless Isle, but most are found as drops rather than as actual wild pets wandering the isle:

There are a number of achievements awarded for completing activities on the Timeless Isle across all types of the game: