This article is about the dungeon mode. For the faction, see Timewalkers. For the level-scaling option available from Chromie, see Timewalking Campaigns.

Timewalking (colloquially referred to as Timewalker or Timewalker mode) is a dungeon difficulty added in patch 6.2.0 of Warlords of Draenor, allowing players to queue up for a randomly selected old school dungeon from 4 AM PDT Wednesday through 3 AM PDT Tuesday for American and Australian servers and from 00:00 CEST Wednesday through 23:01 CEST Monday in Europe. Timewalking difficulty scales down the character's power and gear relative to the dungeon. Loot obtained during this difficulty has the Timewarped tag, which scales up to an item level appropriate for use at the player's level.[1]

Timewalking for The Burning Crusade content is available for characters level 71 and up; Wrath of the Lich King for level 81 and up.[1]; Cataclysm for level 85 and up; Mists of Pandaria[2] for level 91 and up; and Warlords of Draenor for level 101 and up.[3]

Killing bosses in timewalker dungeons will award Timewarped Badges which can be traded for valuable items at the timewalking vendor for that expansion. 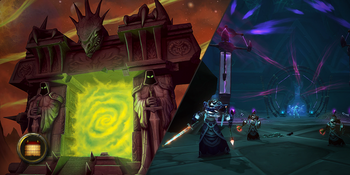 The following dungeons are currently enabled for the Timewalking difficulty in Battle for Azeroth. 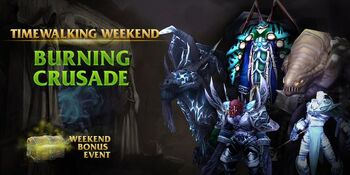 With the Black Temple a metaplot was started to be introduced in the Timewalking events:

Blizzard announced in May 2014 that they were working on a way for higher-level players to tackle lower-level dungeon and raid content, with abilities and gear scaled down to an appropriate level. Likely using the same technology used for Challenge Mode, the Proving Grounds, and scaled battlegrounds, Timewalker mode would allow players to experience older dungeons and raids at a challenging level.[6]

The underlying system was largely implemented with patch 5.4.0 in September 2013,[7] but was not yet accessible to players. However, some players have previously been able to access the mode through a bug in certain dungeons, allowing them to experience an incomplete version of the feature.[7][8]

The plan is to initially introduce the feature for dungeons only.[6]

Prior to release of the official "Timewalking" name, the title "Timewalker" came primarily from game data listing this title as an additional category of instance. Due to the background addition of the new feature around the same time, as well as this obviously being a very fitting title for the new mode, the term has been widely adopted by players to refer to the planned feature.