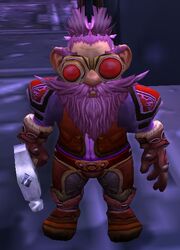 Tinkmaster Overspark is a gnomish engineering trainer located in Tinker Town in the dwarven capital city of Ironforge. He also accompanies Operation: Shieldwall during the invasion of Pandaria. Overspark acts as an emissary of the Alliance for the Rustbolt Resistance on Mechagon Island, trying to discover the origins of gnomanity.

Besides teaching Alliance adventurers, he worked with them to retrieve and fix his mechanical creation - Techbot.

Oglethorpe Obnoticus has an intense dislike for him ever since Overspark and the ruling council of the gnomes banished him for believing he released the Crowd Pummeler 9-60.[1][2]

Overspark accompanied Operation: Shieldwall into Krasarang Wilds and is seen aboard the Skyfire. He is later seen in the Shrine of Seven Stars, where the Alliance dignitaries and allies discuss the pros and cons of using Sha power. He thinks that the Sha can be utilized as a new source of energy, but it is ultimately voted to be destroyed. He is also present during the Assault on Zan'vess. He now holds the title of Chief Architect of Gnomish Engineering.

Overspark also appears with the Alliance army in the hall of Underhold during the Siege of Orgrimmar. He serves as a vendor.

Overspark was a member of the Skyfire crew during the Skyfire's attack on Sylvanas Windrunner's fleet. He attempted to establish a line of communication with the rest of the Alliance fleet during the attack but Stormheim's weather system was too strong. After the Skyfire's destruction by Forsaken saboteurs[3] and the Alliance established themselves in the Skyfire Triage Camp, Overspark created a distress signal to request Alliance reinforcements while the Skyfire survivors evacuate to the safety of Greywatch.[4] While in Stormheim, he mind-controlled a bat Mind-Controlled Dreadwing and adored him. 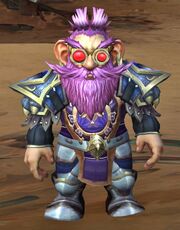 I am Tinkmaster Overspark, and I am the chief architect for modern gnomish engineering principles in the world today. It is my job to ensure that the power of invention continues to shine brightest from our arclight spanners than anywhere else!

Also, if you happen to know a good schematic for radiation elimination, we just so happen to be in the market for one right about now...

Greetings! If you are here to access gnome engineering schemata, then you are welcome to do so. Our scanners report you are a certified gnomish engineer!

Greetings! I am Tinkmaster Overspark, the chief architect of modern Gnomish Engineering.

Our assembly bay is hard at work fashioning all sorts of great mechanical wonders to aid you in not getting stabbed, slashed, blowed up, or otherwise banished from this realm of existence.

Or at least, not by our enemies.

Tell me about Engineering.

As much as I love your enthusiasm to learn the wonders of Gnomish Engineering this really is a conversation best saved for when we are back under the protection of Tinkertown's walls in Ironforge.

Very well. I wish to talk about something else.

Can you repair equipment?

Those freaks managed to blow what was left of our ammunition stores; it's a miracle the ship held together as long as she did!

I must remain undisturbed, <name>.

Before you continue, ask yourself whether whatever you're about to say is more important than the brainstorming of a technological advancement capable of disrupting the entire course of Azeroth's history!

Because that's what I was working on when you so rudely interrupted me, and the Horde will tremble when I finally reveal it!

The secrets of Mechagon are about to be revealed to us. 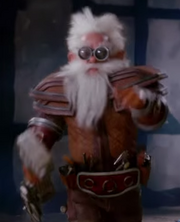