This article is about the race of beings called titans. For the titan organization led by Aman'Thul, see Pantheon. For the titanic language, see Titan (language). For the UI addon/mod that creates a bar at the top of the screen, see Titan Panel.

The titans (sometimes capitalized) are a race of colossal, planet-sized cosmic beings, composed of arcane magic and the primordial matter from which the universe was born. They roamed across the cosmos like walking worlds, imbued with the raw power of creation itself. The titans used this incredible force to find and awaken others of their kind.[1] Hailing from the far reaches of the cosmos, they shaped and brought life and order to countless worlds across the Great Dark Beyond.[2] They were described as perfect and majestic beings who are akin to gods.[3]

The Pantheon as depicted in Chronicle Volume 1. 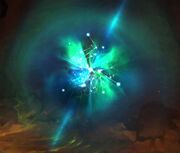 The world-soul of Argus in Antorus, the Burning Throne.

“In many ways, the titans will be the easiest to manipulate. Their singular goal is to impose structure upon everything they see. Show them a force that opposes their drive for Order, and they will be consumed by their urge to eradicate it. Their pantheon, so seemingly united in purpose, is vulnerable to fracturing.”

The titans are colossal godlike beings made up of the primordial matter from which the very universe was born. Imbued with the raw power of creation itself, they roam the cosmos like walking worlds.[4] Titans are born from world-souls, spirits who are formed within the fiery cores of a small number of worlds and who slumber for ages, suffusing the planets they inhabit with Spirit energy before finally awakening. Described as living worlds, their bodies are covered in mountain peaks and rivers, their forms wrapped in cloaks of stardust and their eyes shining like brilliant stars.[5] Bastions of purity and good, the titans are unable to conceive of evil or wickedness in any form.[6]

Titans are heavily tied to the cosmic force known as arcane.[7] In fact, arcane is their very lifeblood. The original Well of Eternity, an enormous lake of volatile arcane energies, was literally the very lifeblood of Azeroth's world-soul.[8] They are also uniquely susceptible to fel magic, but full-grown titans are also immune to the corruptive influences of the void lords.[9] 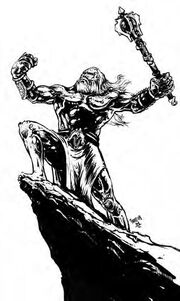 A titan depicted in Shadows & Light.

Many believe them to simply be a progenitor race,[20] akin to gods.[21] Their figure is humanoid but gigantic, with gleaming metallic skin and a perfection of form that makes the heart ache.[22] Each titan cultivates specific interests that relate to particular elements or energy types — essentially, to some small aspect of creation over which the titan holds a measure of dominance. Some titans refer to the piece of creation upon which they focus as their "sphere of power". Furbolgs have legends of seeing the coming of the titans to the world from their homeland in Northrend, implying they predate the titans.[23]

There are two types of titan:

Titans generally believe they are invincible. They wade into the thickest of battles using their most powerful abilities, or even just swinging with massive, alloyed fists. Titans with well-defined spheres of power have wildly varying combat tactics, focusing primarily upon the strengths of their spheres.[26]

Some accounts of the titans give them titles such as "Patron of All Life".[27]

The ancient Iron Forge is perhaps the greatest titan artifact ever unearthed.[28]

"Titan"-labeled models, used for the Watchers.