This article is about the races made by the titans. For the boost to item stats, see Titanforged.

The titan-forged battling the Elemental Lords.

Aedis, Tarneth and the dark keepers of Antorus are keepers separate from Azeroth's who have sided with Sargeras in his Burning Crusade. 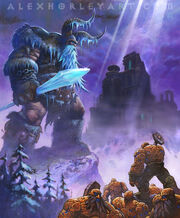 A frost giant and a group of earthen.

The first generation of titan-forged was divided in aesir, fashioned from metal, and vanir, from stone. They are now collectively known as watchers. A number of them were imbued by the Pantheon's members with their specific likeness and powers to lead the titan-forged. Those empowered beings were called the keepers.[1]

After the defeat of the Old Gods, the keepers moved to reshape the surface of the world. To this end, they created a new generation of titan-forged through the Forge of Wills.

This section contains information that needs to be cleaned up. Reason: Copy-pasting the entire text really isn't needed.

Under the guidance of the great forger Khaz'goroth, the Pantheon crafted an army of enormous servants from the crust of Azeroth itself: the aesir and the vanir. The aesir were fashioned from metal, and they would command the powers of storms. The vanir were formed from stone, and they would hold sway over the earth. The members of the Pantheon then imbued a number of their servants with specific likenesses and powers to lead the rest of the titan-forged. These empowered beings were called the Keepers. Collectively, these mighty creatures would be known as the titan-forged.

This new army molded from the world's crust was then sent to war.

Main article: War between the titans and the Old Gods

Led by the keepers, the titan-forged slammed into the Black Empire's northernmost holdings. The resilience and strength of the Pantheon's armies made them an unstoppable force. They unleashed the wrath of gods upon their enemies, scouring legions of n'raqi and aqir and sundering their temples.

The arrival of the titan-forged caught the Old Gods completely off guard. They reeled in response to these stone- and metal-skinned invaders, but they were determined not to lose control over Azeroth. To reassert their dominance, the Old Gods called upon their greatest lieutenants: the elemental lords.

The enraged elemental lords and their minions beset the titan-forged on all sides. Ever wary of fighting a unified elemental army, the keepers resolved to divide and conquer their enemies. Thus they split their own forces and dispatched each group of titan-forged to make war on a specific elemental lord.

Tyr and Odyn volunteered to confront the most destructive elemental lieutenant: Ragnaros the Firelord. Their battle raged for weeks, engulfing the land in fire and magma. Yet the keepers' resilient metal forms kept them safe from Ragnaros's fiery onslaughts. Through sheer strength and force of will, Tyr and Odyn pushed Ragnaros back into his volcanic lair in the east. In a land of boiling acid seas and skies choked with ash, the two keepers defeated the Firelord.

Meanwhile, Archaedas and Freya unleashed their powers upon Therazane the Stonemother. To protect herself and her minions, the elemental ruler retreated into the towering stone spire that she called home. Archaedas used his dominion over the earth to weaken the citadel's foundations and shatter the craggy giants who guarded it. Freya then made colossal roots sprout from the ground to entangle the fortress. They wormed through stone and crystal, buckled the citadel's walls, and brought them down on Therazane's head.

Ra, Thorim, and Hodir waged war with Al'Akir the Windlord. Using their mastery over the skies and storms, they forced the elemental lord back to his lair among the highest peaks of Azeroth. Lightning set the heavens aflame as Al'Akir struggled to hold off his foes. In the end, the three keepers turned the elemental lord's own power against him, defeating Al'Akir atop his lofty domain.

Neptulon the Tidehunter and his minions rushed to aid the other embattled elemental lords, but they were waylaid by Loken and Mimiron. The two keepers used their wits to harry and outmaneuver Neptulon's forces at every turn. Ultimately, Loken unleashed his arcane powers to freeze and shatter the water elementals' forms, while Mimiron crafted enchanted bonds to imprison Neptulon himself.

Although the elemental lords had been defeated, the keepers knew that they could not utterly destroy the beings. The spirits of the elementals were bound to Azeroth itself. If they were killed, their corporal forms would simply manifest again in time.

Ra soon found a solution. He set out to imprison the elementals, much as the great Sargeras had done to demons. Ra first called on the aid of the gifted titan-forged sorceress Helya. They worked in concert to craft their interlinked domains within a pocket dimension known as the Elemental Plane. Ra and Helya then banished the elemental lords and nearly all of their servants to this enchanted prison realm.

Ragnaros and the fire elementals were exiled to a smoldering corner of the Elemental Plane known as the Firelands. Therazane and the earth elementals were locked within the crystalline caverns of Deepholm. Al'Akir and the air elementals were imprisoned among the cloudy spires of the Skywall. Lastly, Neptulon and the water elementals were sucked into the fathomless depths of the Abyssal Maw. Only a few elementals would remain on the surface of Azeroth. With their leaders gone, these beings scattered and abandoned the war.

Having contained the elementals, the keepers turned their attention on the Black Empire's aqiri legions. Many of the insectoids dwelled in vast catacombs that snaked beneath the surface of the devastated world. Archaedas bent the stones and soil to his will, collapsing the aqiri burrows and driving the creatures above ground. Upon emerging from their lairs, the insectoids found themselves surrounded by the titan-forged.

The battle between the titan-forged and the aqir proved unexpectedly vicious. In time, the keepers destroyed most of the aqiri race. Small pockets of the insectoids, those that had tunneled deep underground, escaped the keepers' wrath. Yet they were too weakened to mount a counterattack.

Fall of the Black Empire

The victories over the aqir and the elementals heartened the keepers, but they knew that their greatest battles were still to come. As one, they turned their righteous gaze on the heart of the Black Empire: the sprawling temple city built around the Old God Y'Shaarj. By toppling the most powerful n'raqi bastion on Azeroth, the keepers believed they could crush their enemies in one swift stroke.

The keepers and their allies waded through one swarm of n'raqi after another as they battled their way toward the mountainous form of Y'Shaarj. The broken and mangled bodies of titan-forged and n'raqi alike riddled the landscape by the time the invaders breached the city and assaulted the Old God itself.

Y'Shaarj was more powerful than the keepers had expected. It poisoned the minds of the titan-forged, drawing out their fears and darkening their thoughts.

The Pantheon grew concerned that the Old God would overwhelm their servants. Despite the risk of harming the world, they decided to take direct action.

"The titanspawn" is likely an alternate name for the titan-forged.[5]