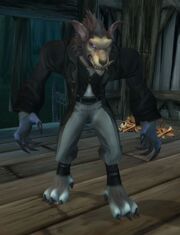 Tobias Mistmantle is a worgen warrior who was presumably part of Darius Crowley's rebels during the civil war.

He can initially be found on the roof of the Stoneward Prison with Darius Crowley and several other men, attempting to drive the attacking worgen away. He later assists Darius Crowley in defending Light's Dawn Cathedral, but is defeated and turned into a worgen. According to Lord Godfrey in the worgen Cinematic, the one who turned Tobias into a worgen is apparently the worgen player. Tobias remained with Darius at Tal'doren for a time. When the Forsaken stole the Scythe of Elune in Woods' End Cabin, he helped to recover it by leading an attack against the Dark rangers as a diversion. Tobias later participated in the Battle for Gilneas. After Sylvanas Windrunner killed Prince Liam Greymane, he tracked down Sylvanas to Light's Dawn Cathedral, where he witnessed the conversation between Sylvanas, General Warhowl, and High Executor Crenshaw and learned that they are going to deploy the plague on Gilneas City. He then moved to Keel Harbor, where he assisted Lorna Crowley in destroying the Horde Gunship blocking their transport ships.

After fleeing from the Forsaken,[1] Tobias arrived in Darkshire seeking news of his brother Stalvan Mistmantle, but finding the townspeople afraid to talk about it, telling him only that he was dead. The breakthrough appeared when Clerk Daltry - who had aided in the original investigation of Stalvan's whereabouts - directed adventurers to the portions of Stalvan's journal, which had been taken and shredded by feral worgen during an attack on Darkshire's town hall. Tobias sought to find out the truth of what happened, and turned to Madame Eva, who had begun the hunt for Stalvan years before. Using the

[Mistmantle Family Ring] carried by Tobias (Stalvan had dropped a similar ring as proof of death in the original quest), Madame Eva directed adventurers back to Manor Mistmantle, where Stalvan rose from his grave seeking revenge, and had to be destroyed again.[2] 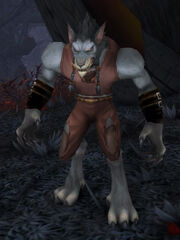 Tobias Mistmantle as a worgen

Not a bad place here, if you aren't into the whole "sunshine" thing.

It is known from a letter that his brother Stalvan Mistmantle spent time in Silverpine Forest. If so, the brothers Mistmantle could both originate from this region, with Tobias joining the Northgate rebellion once the Greymane Wall was built to split off Silverpine from the Gilnean peninsula.