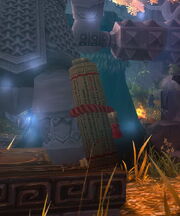 Together, We Are Strong is a wood-panel scroll leaning against the leg of a mogu statue, found at [26.6, 21.5]

on the southwestern ridge of Ruins Rise in Vale of Eternal Blossoms.

[What Is Worth Fighting For].

The strength of the mogu empire was not in numbers, but in fear. Using fear they controlled vast cities of slaves and maintained a chokehold over the old empire.

While it was the pandaren who first rebelled against the mogu, they were not the only ones to do so. The hozen soon lent their ferocity, the jinyu their wisdom, and the grummles acted as messengers for the rebels while simultaneously stopping delivery of food and news to their mogu slavemasters.

Imperial armies starved, messages of vital importance were no longer delivered, and the entire foundation of the empire cracked. The mogu knew nothing of growing their own food or distributing resources to their troops. Entire armies sat in their barracks oblivious to the rebellion taking place until it was too late.

In essence, the very strength of the empire was turned against itself. The races of Pandaria were united in a single purpose, and discovered that they were strong.