The Spirit of Torga 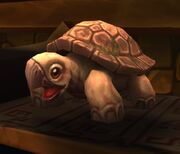 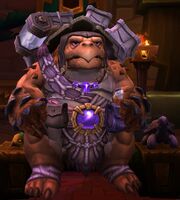 Torga, the turtle, is one of the loa of the Zandalari pantheon. He is a wise and benevolent loa, and the tortollan people used to make pilgrimages to him to hear his stories.[1]

However, Torga was killed by the blood trolls in Nazmir. They then consumed his flesh,[2] and used his blood to raise undead[3] and to summon Jungo, Herald of G'huun.[4] The location where his corpse now lays is known as Torga's Rest.

Bwonsamdi later summoned the Spirit of Torga as a way to speak to the turtle loa.[5][6] Torga was later reincarnated as a young turtle and now sits atop the head of the tortollan Lashk.[7] After Lashk becomes a member of the Zanchuli Council, Torga is seen in the Hall of Chroniclers of the Great Seal in Dazar'alor.

Through de blue Torga do glide.
Oceans deep and journeys wide.
De one who strives, de one who seeks,
Make his heart be full, his interest piqued.


Dere be no legend told,
Dat Torga will not know.
To listen is his pleasure,
To hear your tale, his treasure.


And if to you he tells his story,
Dat may be your highest glory.
Torga will remember.
Torga is eternal.[8]