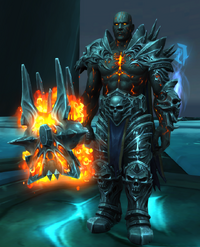 Torment Chamber: Thrall is the week six quest in Torghast, first offered in the week of December 29. Like

[60] Torment Chamber: Jaina, this quest takes place in a special wing of Torghast, accessed via the Wayfinder, based on the Upper Reaches.

Bolvar will offer the next quest,

[60] Signs of the Lion, in week seven, or twenty hours after this quest was completed.

Rescue Thrall from Torghast, Tower of the Damned.

Using the totem you recovered, I will alter the Attuned Shard to guide you to Thrall's location.

<Bolvar hands you the crystalline object.>

Take care. You know the torments Baine and Lady Proudmoore endured in that accursed place. Thrall's confinement will be no less harrowing.

Beware. The deeper you journey into the Tower of the Damned, the closer you get to the Jailer himself.

Free Thrall, <name>... before all hope is lost.

All our allies must be saved, <name>.

You have braved torments beyond most mortals' understanding, <name>.

To Torghast, and the Wayfinder:

<When infused with an Attuned Shard, this device can open hidden pathways within the tower.>

[Attuned Shard] to begin your search for Thrall.>

Highlord Bolvar Fordragon says: Each time I gaze into Torghast, I sense malevolent eyes staring back. The risk grows ever greater, but we cannot relent.

This torment chamber is based on layer 1 of the Upper Reaches. Nothing special of note.

Sylvanas speaking with the Jailer

On floor three, an in-game cutscene plays out:

The Jailer and Sylvanas appear through a side entrance and the player character quickly crouches down behind a nearby pillar to eavesdrop on the conversation.
The Jailer says: ...All that matters is we now possess the necessary instrument. We must begin its preparation.
Sylvanas Windrunner says: Leave him to me. You've seen what he is capable of, when he believes in the cause. A measure of patience may yield... superior results.
The Jailer says: Very well. We have our weapon. Now we shall hone it.
The two continue through another door and disappear.

At the far end, Suppressors Cer, Vellon, Hersi, and Arch-Tyrant Zerios are all channeling a spell into Thrall. The Arch Suppressor must be attacked first, as the others are all immune to damage.

In the process of breaking out, he will knock the three suppressors down to 10% health, stunning them. Additionally, an earthen hand will immobilize the arch-tyrant. Take them all out, then interact with Thrall:

Thrall says: At last... the torment is over.
Thrall says: I've had enough of this place. Let's go.
Thrall walks out the exit portal.

Thrall says: The Maw... I remember. Feels so long ago.
Thrall says: You escaped the Jailer... yes. It is becoming clearer now.

Head to the waystone:

Thrall says: The waystone! Our path out of here.

Thrall reunited with his allies

Thrall says: I have seen only the darkest reaches of the Shadowlands. It is good to know there are places of hope as well.
Thrall says: May the spirits of my ancestors be safe in realms of comfort and peace.

Thrall says: My friends!
Baine Bloodhoof says: Thrall! Praise the Earthmother! I am glad of your return, brother.
Calia Menethil says: It is a relief to have you back, Thrall. I will send word to Aggra and the Regent Lord at once.
Lady Jaina Proudmoore says: I feared the worst. Baine and I both know the horrors that the Jailer inflicted.
Thrall says: The things I saw in that place. The torments I endured...
Lady Jaina Proudmoore says: ...are best not relived. At least, not now.

Bolvar will offer the next quest in week seven, or in twenty hours.

Description
You must now venture into Thrall's Torment Chamber.
The Jailer himself may be there.
Take care. Do everything in your power to ensure your presence goes undetected.
Find Thrall. Let us hope the torments he has endured have not consumed him.
Progress

You must find Thrall in Torghast.

Upon completion
On complete
Lady Jaina Proudmoore says: Thrall, do you know where they've taken Anduin?
Thrall says: My captors spoke of a valuable prisoner held in a chamber deep within the Jailer's tower.
Thrall says: It has to be Anduin.
Baine Bloodhoof says: Highlord. You have peered into Torghast and guided the Maw Walker through its torments.
Baine Bloodhoof says: I beg you to look deeper. To find the king you once safeguarded as a boy.
Highlord Bolvar Fordragon says: What you ask... poses a terrible risk. To all of us.

Description
You must now venture into the Upper Reaches of Torghast. The most dangerous portion of the tower.

Description
You must now venture into the Upper Reaches of Torghast. Zovaal himself might be here. We must hope that your presence is not detected by the Jailer.
Find Thrall, or whatever is left of him after enduring as much torment as he surely has.
Entering floor six
Highlord Bolvar Fordragon says: Maw Walker? Have you lost your way? Where...
The Jailer says: Do you like what you see? I look forward to welcoming you to my domain.
Thrall yells: No... I mustn't give up hope.
Thrall yells: AAAHHHHHHHH!