Tortollans are a race of turtle-like humanoids native to Zandalar. Some have left the isle to explore other areas, such as Kul Tiras.

Tortollans first appeared in Hearthstone, where they lived in Un'Goro Crater.

A tortollan begins his or her life in great danger, as they must hurry from the beach to the safety of the sea just like turtle hatchlings.[1][2] Tortollans can live for thousands of years,[3][4] with a 2,372-year-old apparently still being considered young.[3] There does not appear to be any physical difference between male and female tortollans, though their voices are distinctly masculine or feminine.

The tortollan race has roamed Azeroth's depths for millennia. While they are clearly an amphibious people, it is suggested that they can breathe underwater (though it is possible this is actually achieved through their scroll magic). In either case, traveling and surviving underwater as they do, they consider themselves to be "one with the sea."[5]

In the time of King Tezlekhan, great grandfather to the current Zandalari king Rastakhan, the Zandalari tried to get the tortollans to leave Zandalar. But because tortollans live longer than trolls do, they were able to get political dirt on the royal family and convince Tezlekhan to let them stay.[6]

The sea turtle Ai'twen once saved many tortollans from the "great purge of the Inky Grotto."[7]

Always in search of a good story, the tortollans make a regular pilgrimage to visit the turtle loa Torga despite the omnipresent danger the blood trolls pose in Nazmir.[8]

The ankoans learned long ago to never underestimate tortollans, especially how their warriors use unconventional tactics when fighting their common enemy, the naga, and are always eager to learn what the tortollans have come up with.[9]

The ancient tortollans are constantly in pursuit of knowledge and the acquisition of rare artifacts, and they're always in need of brave souls to help them acquire what they seek. Aiding them can be risky, but ultimately it will be worth one's while to have these erudite people on one's side.[10] Tortollans make extensive use of magic scrolls in their spellcasting.

Tortollans seem to be very integrated with the Zandalari culture, living in Zuldazar right alongside Zandalari trolls. One tortollan, Jol the Ancient, is even the one of King Rastakhan's most trusted healers.[11] However, tortollans tend to stay neutral in most matters.[12] The Zandalari allow the tortollans free passage into their lands because of the useful information they provide the trolls.[6]

Tortollans revere Torga and love to listen to his stories.[13] The tortollans have spent hundreds of years gathering stories.[14] The Tortaka tribe in Vol'dun have become followers of Kimbul, a tiger loa.[15]

They love to drink the venom from eels, which gives them a burst of energy. They refer to this as "eel juice", but are aware that it is likely not safe for non-tortollans.[16] The

[Centennial Blossom], a rare flower that blooms only once every hundred years, is highly prized by the long-lived races of Zuldazar like tortollans.

Tortollans love the stories of Loh, a young tortollan who traveled the world. When telling the stories, tortollans have their children navigate a turtle representing Loh through a maze.[2]

[Tottle] is a part of the Digital Deluxe Edition and Collector's Edition of World of Warcraft: Battle for Azeroth.

“The greatest virtue is patience.”

Tortollans are a mysterious race of primitive turtle people that dwell in the jungles of Un'Goro Crater in the Journey to Un'Goro expansion for Hearthstone. Their leader is a female named Spiritsinger Umbra.[18]

After Professor Doyle and his assistant Eddie were separated from the rest of their expedition group, they wandered through Un'Goro for several days until they came to a marsh, where they were captured by "hideous lizard people". Shortly after, however, the two were rescued by a group of tortollans. Doyle was excited to meet an undiscovered tribe, while Eddie was simply happy to meet something that wasn't trying to eat them. At the campfire, Eddie asked Umbra for help finding the rest of the expedition, but she simply smiled and said, "The greatest virtue is patience". Eddie suspected that she was going to lead them to a hilltop village he spotted before they made camp.[17]

Two days later, Doyle and Eddie were led to the village as expected and discovered that it was full of strange, primitive-looking murlocs. Umbra handed the two explorers over to them, and the murlocs began drumming on driftwood totems to summon a lot more murlocs. Eddie thought to himself that he and the professor were safe for now, but he also started to wonder if it was a mistake to trust the tortollans.[18] 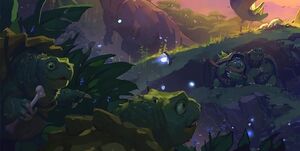 After spending a few days with the murlocs and their leader, Megafin, and discovering that the entire village was built on the back of a giant dinosaur, Umbra shouted something to Megafin and pointed in the direction of the volcano in the center of Un'Goro, causing the entire village to begin moving in that direction. Once the explorers, tortollans and murlocs arrived at the Golakka Hot Springs at the base of the volcano, Umbra took Doyle and Eddie aside and told them to climb the "fire mountain" to see "the truth". The explorers waved goodbye to their new friends and pitched a base camp at the base of the volcano, leaving them to decide whether to take the smoother but slower path, or the more jagged and faster one.[18]

After a series of adventures, the two explorers and their new companions — Galvadon and a group of wayward paladins — eventually reunited with Umbra, who aided them in a battle against the saurok. The humans, tortollans, dinosaurs, and saurok then journeyed together to the Waygate, where they performed a great ritual with the aid of Amara, Warden of Hope. Umbra kept looking at the sky and seemed anxious to get going. Suddenly a meteor appeared in the sky, but before long the Waygate flashed with blinding light and the meteor was gone. Everyone started going their separate ways, but before they left, Umbra and the tortollans solemnly thanked Doyle and Eddie and promised to help them get back to their expedition.[19]

Tortollans tend not to be particularly clever.[20] They are known to ride stegodons into battle[21] and appear to revere or worship the turtle Ancient, Tortolla.[22] They are known to eat omelettes made from raptor eggs[23] as well as "beetleberries".[24]

On the Hearthstone Wiki