Touch of the Banshee

The Touch of the Banshee is a book found in the Heart of Acherus in the Scarlet Enclave.[49, 32] 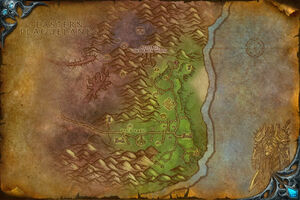 Touch of the Banshee

Skor'zad nervously peered around the corner of the column. As he has planned, he saw her floating there, alone in her chamber. Had he made the right decision, visiting the banshee's private chamber so late at night? The necromancers would surely put him back into the ground if he was discovered. What's worse, he didn't even know if his feelings were requited, and Madame Sidnari was known for her short temper.

What few doubts the zombie had were quickly tossed aside once he caught a full glimpse of her beauty. Her distinctly elven features - a reminder of her form in a past life - were now only enhanced by the oozing wounds and scabs that dotted her face. Purple, almost translucent skin was frugally covered by necrotic wrappings that hugged her waifish figure. Cold flesh neatly fused with the ephemeral as her legless torso sat upon a bluish sphere of energy, drifting a few inches above the cold granite floor. Skor'zad allowed himself to relax a bit and wiped the sweat and ichor that dripped alternatingly from his prominent brow.

Seemingly unaware of his presence, she glided to the only window in the room and looked out upon the battlefield. Desolation stretched out before her. Not six hours ago has the shrill cries of human children pierced the air, but now... only the sweet silence of death.

The wind caught her hair now, playfully flipping the worm-like tangles around her hollowed-out eye sockets. Skor'zad, suddenly aware that he was leaning forward with lust, shrank back behind the column, terrified that the Dark Wailer might have seen him. She had indeed seen him - but he had no reason to fear.

"Skor'zad," she said. "I've been waiting for you. You fought well today." The banshee glanced coyly over her rotting right shoulder, allowing her wrappings to loosen ever so slightly. "It's time you... collected your reward."

<The next few pages seem to be stuck together.>