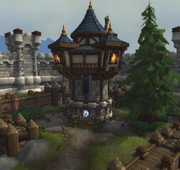 The restored Tower of Arathor

The Tower of Arathor is found inside the mage district of Stromgarde Keep in the Arathi Highlands. In Battle for Azeroth the tower and Stromgarde have been restored.

When under Alliance control, the district is filled with guardsmen and civilians; having various amenities such as vendors, profession trainers and a mailbox. When the Horde destroys the city, the district remains untouched, but evacuated with a permanent portal to Stormwind City available in its entrance.

The Tower of Arathor before it was restored.

The Tower of Arathor was a mage tower dedicated to the study of the wizards of the old Arathorian Empire.[citation needed]  During Stromgarde's darkest age, the tower and the surrounding area were taken over by the Boulderfist ogres.

The tower had magical wards placed by Archmage Trelane. The Boulderfist shaman managed to steal some gems from the area.[1]

When the Knights of the Ebon Blade made their way to Stromgarde Keep in order to resurrect the deceased King Thoras Trollbane, Prince Galen asked them to kill the Witherbark trolls that had settled in the former mage district of the city.[2]

When Stromgarde was reclaimed and restored, the tower was renovated as well. While no longer a subzone, the tower sits in the exact same spot. Notably, the mage district is the only part of Stromgarde to not be destroyed when the Horde claims the city, and the district's gates are always closed during this time.