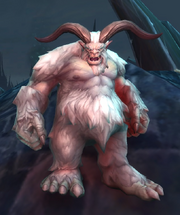 This clever toy is equipped with a secret switch to disable its 'tranquil' mode. Luckily, even the engineers who built it don't know how to find it.

This item is crafted with Engineering (250); taught once by

This item can also rarely be found in

Due to Thorium Widget and Truesilver Transformer needing 260 skill, if you want to create this using engineering parts that you've created then you will need 260 skill.

[Ice Thistle E'ko] to make when it first appeared. E'ko is only obtainable via a repeatable Horde quest, so the only way for Alliance players to make one of these yeti was to buy the E'ko from a neutral auction house. However, with patch 1.9.3, the requirement for Ice Thistle E'ko was changed to

Physically, Tranquil Mechanical Yeti looks like a small white yeti or wendigo. It's approximately the same size as the combat variants, which is to say that it is about as tall as a gnome, making it one of the larger small pets in the game.

The schematic is no longer available since patch 4.0.3a. Previously, it was taught by Umi Rumplesnicker after completing her quest chain Are We There, Yeti?.

The pet journal text could be a reference to Small Soldiers.