Treants (or ents) are mighty tree-folk imbued with great wisdom and strength native to the forests of Azeroth.[1] They are listed as elementals in World of Warcraft. 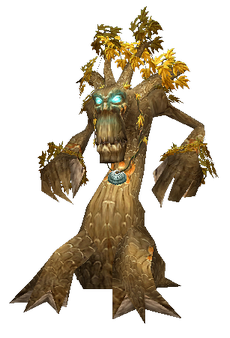 Treants are powerful, ancient trees and more primitive forms of the wise Ancients[citation needed]  that served under Cenarius in ages past. Treants resemble large moving trees with faces. Over time, treants also grow to be ancient protectors.[2]

They are closely affiliated with druids, and are often seen accompanying powerful druids and keepers of the grove. Many treants were driven mad during the Third War. The destruction of the forests, as well as demonic corruption, has driven them to lash out at anyone that approaches. Pandaren have, on rare occasions, infused their drinks with corewood from the treants to the west of the Dread Wastes.[3]

The lowest level treants are found in the southern reaches of Sunstrider Isle, from the Shrine of Dath'Remar all the way to the bridge. The lowest level hostile treants are the Level 9 Withered Green Keepers in the Eversong Woods. In past times they assisted the blood elves in gardening the Isle, but have since grown out of control.[4] The treants of the Ghostlands are also remnants of former allies of the Blood Elves, but retaliated when the Blood Elves were forced to burn the woods surrounding the Ghostlands to prevent further intrusion by the Scourge. Now, the Withered Green Keepers, led by Old Whitebark have turned against their former allies an attempt to foster the regrowth of their forest. There are also treants defending Darnassus.

Technically there are treants in Terokkar Forest: They were once trees, but following the explosion in Auchindoun, the magic corrupted them and they became animated. In Outland you (as an Alliance player) introduce treants into the ecosystem in Blade's Edge Mountains, while the Cenarion Expedition seeks to heal lands once belonging to the treants and ancients. This quest calls for you to speed up growth of Grove Seedlings which, when fully grown, become Living Grove Defenders, neutral to the Alliance and hostile to the Horde.[5] Treants have also been spotted in Crystalsong Forest and Pandaria and are both neutral and hostile.

Druids and treants in World of Warcraft

Treants assisted night elves. Some of them were corrupted.

This creature looks to be a short, angry tree-man. Its branchlike arms end in three-fingered claws. Treants are small, tree-like beings. They are rarely seen in times of peace, but in days of conflict they patrol the forests and fling themselves at nature's enemies. Treants do not speak, but they understand Darnassian. Little is subtle about a treant's tactics. They charge their enemies as soon as they can, slashing with their wooden claws.[6]