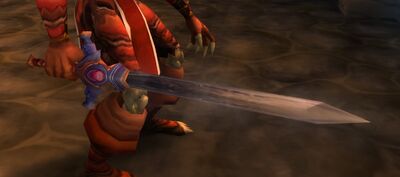 Trol'kalar (or Trol'Kalar)[1] was the legendary blade of Lord Ignaeus of Strom, and became a precious heirloom of the Trollbane family and a weapon of great power.[2]

The dread sword known as the Trol'kalar (Troll Slayer / troll slayer, in the ancient tongue),[3] was first known to be wielded by Strom's most capable warlord, Lord Ignaeus Trollbane, during the Troll Wars. After the war and with the departure of Thoradin's ruling descendants the Trollbane family ascended to the throne. The Trol'kalar image changed by also becoming a true emblem of power in that region, being rightly wielded only by the direct descendants of Lord Ignaeus as a symbol of rulership over the glorious Kingdom of Stromgarde.

The Trol'kalar's fame (or infamy) is probably attributed to its ability to easily dispatch any troll with a few slashes. From there came its name, Trol'kalar, and very possibly Ignaeus' own nickname which later became the new name of his bloodline, the Trollbane family.

The sword was for a long time the only companion of King Thoras Trollbane.[2]

With the mysterious death of Stromgarde's last ruler, Lord Thoras Trollbane, and because of the fragile condition of the Stromgarde nation, the Trol'kalar was sealed with Thoras in his tomb, thought to be safe in the crypt.[2] It waited for the day when a new champion would rise from the people of Arathi Highlands and bring honor and glory to maybe the greatest Kingdom Azeroth ever knew.[citation needed]

With Thoras Trollbane dead and his kingdom in ruins, the troll hunter Zengu was sent to the Arathi Highlands by order of Vol'jin himself, instructed to make every effort to claim Trol'kalar from the humans for use in the coming battle against Hakkar the Soulflayer and his legions in Zul'Gurub.[4] Zengu dispatched agents of the Horde to hunt down the portions of the

[Sigil of Ignaeus] that would open the tomb.[5][6][7] After locating the four sigils and slaying Prince Galen, Thoras' son and leader of the remnants of Stromgarde,[8] the Horde agents were able to bring Trol'kalar back to Zengu, who would then depart for Stranglethorn Vale for its use in the battle against Hakkar.[9]

Zengu did not get far, however; according to Dark Ranger Alina at the camp known as Galen's Fall, Zengu was attacked and killed by Stromgarde troops before he was able to leave Arathi with his prize. The Stromgarde soldiers took back Trol'kalar and the Sigil of Ignaeus, dividing it once more among the surviving troops. Prince Galen Trollbane, resurrected by the Forsaken, now directs Horde soldiers to once again find the divided sigils and reclaim Trol'kalar.[10]

Dealing with the Ebon Blade, Galen tried to use the death knights to rid his city of the invading trolls in exchange of Trol'kalar, which they planned to use to open Thoras Trollbane's tomb. However, not wanting to face the father he had murdered, he tried to kill the Deathlord, Thassarian and Nazgrim after they purged Stromgarde of the trolls. Galen was executed and the death knights used Trol'kalar to open the crypt, where the Deathlord raised Thoras Trollbane as one of the Four Horsemen.[11] Trol'kalar was then stolen, and its whereabouts are unknown.[2]

Nimboya: "With Thoras Trollbane dead and Stromgarde in ruins, Vol'jin has instructed that we make every effort to spirit the legendary sword Trol'kalar from the humans' hands, so that we might use it in our coming battles against the trolls of Zul'Gurub."[12]

Zengu: "In ancient times, trolls fought against the Arathorian Empire and our most capable adversary, Lord Ignaeus of Strom, named Trollbane. He rode into battle wielding Trol'kalar - troll slayer, in their ancient tongue."[13]

This bastard sword is notched and old, but its appearance belies its sharpness and balance. Trol'Kalar pulses with a dim white radiance, almost as if alive. The weapon’s name means “Troll Slayer” in an ancient tongue. The scion of the Trollbane family, Prince Galen of Stromgarde, wields Trol’Kalar against forsaken, the Syndicate, murlocs and ogres instead of its traditional foes. The blade still proves deadly.[14]

When the Trollbane family manor was hit with a surprise bandit raid while much of the house guard was out fighting the Horde, a human servant called Yernim Weltom hid the family's artifacts in the kitchen, filling the priceless chalice of opal voices with gravy, tossing the ancient sword Trol'kalar into the pile of pig offal and putting the cloak of elemental protection on himself and jumping into the massive kitchen fire to hide. Prince Liam, grandfather of Galen Trollbane, was so impressed with his servant's ingenuity in hiding the castle's artifacts that he appointed him Caretaker of Artifacts with a staff of two, and commanded the young servant to come up with a better plan to protect the artifacts.[15]

When a troll is slashed by this bastard sword, it cannot regenerate as it would when hurt by a common melee weapon. The wounds heal at their normal rate, just as if the troll victim didn't count with additional regeneration powers at all. The Trol'kalar also procs additional holy damage to all evil creatures (trolls included).[citation needed]