This article is a copy of "The Troll Compendium," an official article by Blizzard Entertainment. It presented a variety of information about trolls. The original article, formerly located at http://www.worldofwarcraft.com/info/story/trolls/jungletrolls.html, did not survive the overhaul of the World of Warcraft Official Website. 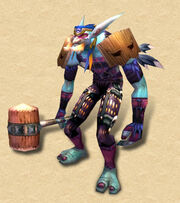 Description: The jungle trolls' bodies are covered in short, soft fur that causes the trolls to appear purple or gray. Jungle trolls are also unusually lithe relative to other trolls.

History: Much as the forest trolls came to dominate Lordaeron, the jungle trolls established a firm hold over the southeastern jungles of ancient Kalimdor. The jungle trolls' empire took its name from their strongest tribe: the Gurubashi. In modern times, the word Gurubashi can refer to the jungle trolls' ancient empire (and thus to jungle trolls as a whole) or to the Gurubashi tribe in particular. The Gurubashi and Amani empires battled the relentless aqir until the insectoids' kingdom was split in two, but the trolls never achieved a true victory.

After the Great Sundering, famine and violence spread until the jungle trolls begged their gods for aid. One god answered: Hakkar the Soulflayer. He gave the jungle trolls great power, but in return he demanded that they sacrifice trolls in his name. As his hunger for blood grew, he ordered his priests, the Hakkari, to bring him physically into the world of Azeroth so that he could feed directly on his victims.

Most of the Hakkari were horrified at the idea, but the Atal'ai, a small extremist faction of the Hakkari, agreed to do as Hakkar wished. Before the Atal'ai could complete the summoning, the Hakkari and other jungle trolls rose up in open revolt. Even the Zandalar tribe joined the fight against Hakkar, whose avatar on Azeroth was ultimately destroyed. The Atal'ai were driven from the jungles and hunted nearly to extinction. Still, a small group of them escaped into the Swamp of Sorrows and built a great temple to their god: the Temple of Atal'Hakkar.

The Hakkari, too, were slain or exiled for the evil deeds they had done in Hakkar's name. Bitter and desperate, they joined the Atal'ai in the swamps and resolved to bring the bloodthirsty god into Azeroth. The green Dragon Aspect, Ysera the Dreamer, soon learned what the Atal'ai and Hakkari were working toward, and she smashed the temple beneath the marshes. To this day, the temple's ruins are guarded by mighty green dragons. Nevertheless, trolls spoke of a prophecy that Hakkar would one day be reborn into the world.

The remnants of the Gurubashi empire went their separate ways, claiming territories in the vast jungles of Stranglethorn Vale. These scattered tribes began fighting one another, and at length the Darkspear tribe left the continent altogether and settled on a remote desert island, where they remained until they joined the Horde and fought in the Third War. Today the Darkspears live along the southeast coast of Durotar.

The information could still retrieved from http://www.wow-europe.com/en/info/story/trolls/jungletrolls.html.