This article is a copy of "The Troll Compendium," an official article by Blizzard Entertainment. It presented a variety of information about trolls. The original article, formerly located at http://www.worldofwarcraft.com/info/story/trolls/troll-info.html, did not survive the overhaul of the World of Warcraft Official Website. 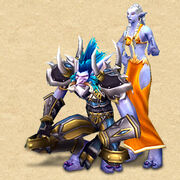 Trolls average seven feet in height and two hundred pounds in weight, save for two tribes, the Drakkari and the Zandalari, who tend to be somewhat larger than their kindred. As with other races, there are also scattered trolls who far exceed the normal size range. For further discussion of these outliers, consult the below section on these so-called "monstrous" trolls.

All trolls possess astonishing physical resilience: they can heal grievous physical injuries and regenerate lost limbs. This accelerated rate of healing makes trolls formidable adversaries on the field of battle.

Most trolls seem to practice cannibalism. Several specific troll tribes have been confirmed as cannibalistic, including the Mossflayer and Vilebranch tribes. Furthermore, all the currently known tribes of ice trolls practice cannibalism. Sand trolls, forest trolls, and jungle trolls are also frequently cannibalistic, though not always. Even the mysterious dark trolls are believed to be cannibals for the most part. Yet there are several notable exceptions. For example, the Zandalar and Revantusk tribes do not consume troll flesh. The Darkspear tribe, too, was cannibalistic until it joined the Horde, at which point the Darkspears officially gave up cannibalism.

Not all trolls practice voodoo, but it is certainly at least as widespread as cannibalism. Little is known about the emergence of voodoo among the trolls, for most tribes that possess such knowledge are unwilling to share it with outsiders. However, with the recent advent of Zandalari trolls to Yojamba Isle, several notable researchers have come to speculate that voodoo many have originated with the Zandalari.

A small number of trolls are strikingly larger and more heavily muscled than the rest of their brethren. There is no racial distinction between them and the rest of the troll race. A variety of reasons might be behind this unusual size and musculature. For example, dire trolls might have been altered alchemically or magically. They might also simply have been born larger than average. Regardless of the day-to-day prejudices that these trolls must contend with from other races, dire trolls are not regarded as monstrous by other trolls.

The information could still retrieved from http://www.wow-europe.com/en/info/story/trolls/troll-info.html.