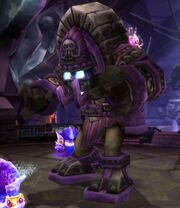 Troll golems are golems made by various troll tribes. So far, jungle, ice, and Zandalari trolls have included golems in their arsenal. They can be powered in different ways. Some are powered by mojo,[1] some by voodoo and mojo,[2] and others by spirit.[3][4] A few have even been powered by channelling the powers of the loa into them.[5] Zandalari retrieve the spirits within golems through "Soulcatcher Totems".[6]

The Drakkari Empire was known for liberal use of their golems to defend their territories, with guardians patrolling through the entirety of Zul'Drak; namely near Gundrak. The Zandalari Empire has also used extremely liberal amounts of golems, with them being used by the Zandalari Invaders, acting as city guards within Dazar'alor, and being used to keep the peace within the Terrace of the Speakers. Finally, the Darkspear tribe have also shown their usage of the constructs during the Battle for Stromgarde, where Darkspear Trollems could be seen when Rokhan commanded the field. 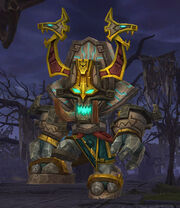 A Zandalari golem on the Isle of Thunder. 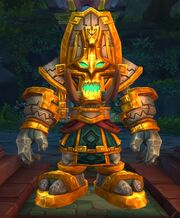 A Zandalari golem in Zuldazar.

According to Tol'mar, he's never seen anything like the Drakkari Colossus, which is reportedly the first construct made from animating a golem with mojo. It is possible that the nature of the colossus was new to Tol'mar since it was made from the mojo of sacrificed Loa.[7]