Wowpedia
Register
Don't have an account?
Sign In
Advertisement
in: Scenarios, Troves of the Thunder King, Isle of Thunder
English

Troves of the Thunder King

[Key to the Palace of Lei Shen]. It takes place in the Thunder King's Citadel version of the Throne of Thunder raid instance. There is also a one-time quest,

[35] Treasures of the Thunder King, that will award reputation with the Shado-Pan Assault for completing this scenario.

Shado-Pan scouts have returned word that more treasures from Lei Shen's tomb are being moved and Taoshi will stop at nothing to disrupt Lei Shen. She will do anything to hinder the rise of his power and slow down his armies being bolstered. Even if it means resorting to highway robbery. 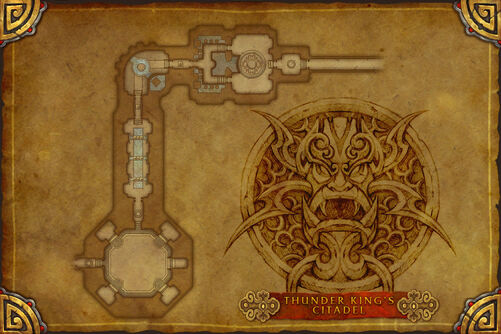 Troves of the Thunder King

The scenario takes place in a special version of the Throne of Thunder, between what's normally Horridon and the Council of Elders on the Royal Amphitheater map. Starting from a safe room at the end of a long north-south hallway, adventurers will give the word to Taoshi, who will open the door, consuming the key. A five-minute timer is started and the adventurer is on his or her own to steal from Mogu Treasure Chests, dodge lightning blasts and statues' overhand strikes, while finding switches to open locked doors.

You will only have a limited amount of time to gather as much treasure as you can. Speak to Taoshi when you're ready to begin.

From the initial spawn position in the scenario, head north to speak with Taoshi, by the door. Feel free to stop with Supplier Bao for any last-minute repairs or supplies:

When ready, Taoshi will start the event:

The mogu and the Zandalari are in the process of moving another shipment of treasures from Lei Shen's tomb to his throne room. We will strike quickly and take as much as we can before his forces arrive. You will only have a limited time before we pull you out, so be efficient <name>.

We're only getting one shot at this, so make it count.

When you're ready to begin, hand me the key and I'll open the door.

Grab as much treasure as you can and reach the exit before the timer expires.

All along the path are red Mogu Treasure Chests along the walls. They have 5-10

each and may also contain:

There are also Golden Treasure Chests which have roughly 20

The door opens into a pathway leading north. There are one-time-use green runes on the ground that provide a run speed boost for a few seconds. Lightning walls occasionally pop up and will slow anyone who steps through them:

Mogu statues will do their typical 90-degree-arc overhand smash:

At the north end of the room is a locked door. Immediately to the left of the steps leading up to the locked door is a lever that will open it. Taking any damage will interrupt the cast to flip the lever, so make sure there are no Ashen Weavers around, who also have a rooting ability:

North of the locked door are a number of trap tiles. Use the cloud tiles (or the crates) to jump up to the sides and loot the treasure chests and also to get past the fire/lightning tiles in the room. After that room is an open area that turns right, filled with more trap tiles, red runes, and the occasional Zandalari Arcweaver, who has the following abilities:

The second locked door is in this room, and the lever to open it is north of the door.

Another trap room leads in to the third area. This room adds Stone Watchers and a Stone Sentry to the mix.

The sleeping Stone Watcher quilen have the following abilities:

The patrolling Stone Sentry has the following abilities:

The locked door is on the southern path, but the lever to open it is on the stairs leading to the blocked-off door on the northern path. Go north first, trigger the lever, then head south to get to the third locked door, or use the

[Polymorphic Key] (Alliance / Horde) to skip the whole northern side of the room.

The final room has God-Hulk Gulkan, an elite dire troll with 2.3 million health and the following abilities:

When you're ready to go, let me know and I'll get you out of here.

I'm ready to leave. Let's get out of here.

The screen fades to black.

Taoshi says: Good job making it out in time. We recovered a key that should work on one of these troves. It's all yours.

Once the timer is up, the screen will fade to black.

You are out of time.
Taoshi says: We barely pulled you out of there. You're lucky to be alive.

On the other side, Taoshi, Supplier Bao, Tenwu, a handful of Wu Kao Rogues, and the corpses of many a Shan'ze Bloodseeker and Stone Sentry litter the floor of the locked room the adventurer finds itself in. There are also plenty of locked Lei Shen's Burial Troves, which require a

They additionally have an extremely rare chance to contain Raid Finder-level loot (item level 502) from the Throne of Thunder.

Speak with Taoshi again to exit the scenario.

Make it out of there with anything good?

Let's head outside to the island.