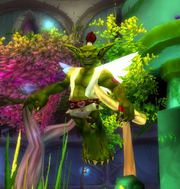 The Truesilver Shafted Arrow item teaches the character the skill to summon and dismiss Peddlefeet, a winged, flying goblin companion. Though armed with a bow, Peddlefeet is a non-combat companion and will not aid you in battle.

As of 2010, a Truesilver Shafted Arrow can be purchased from a Lovely Merchant for 40 Love Tokens.

The power of love can be a dangerous thing, especially when wielded by an airborne, ill-tempered goblin.

Getting this item is required for the

[Perma-Peddle] achievement (but not the

Peddlefeet uses the same winged male goblin model as the Kwee Q. Peddlefeet NPC, but is roughly only half as tall; so he's not actually goblin sized. Peddlefeet hovers as do all flying companions. He looks like he would be capable of walking, but this companion never lands; the goblin animations for walking are not applied.

Peddlefeet can also be spawned as a companion on another player's character using the [Silver Shafted Arrow], a much more common "Adored" prize item.

Left-clicking on Peddlefeet causes him to say the standard goblin phrases, such as Yo!, Wazzup!, Keep it real!, and Time is money, friend!.

In previous years, Truesilver Shafted Arrow was one of several possible items found inside

[Pledge of Adoration] or Gift of Adoration given out by city guards and citizens during the Love is in the Air world event. The drop rate for this item was around 1%; this combined with the once-per-hour rate at which the pledges and gifts could be acquired made it the rarest Love is in the Air prize at the time.