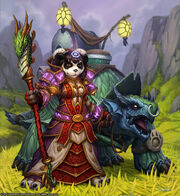 A pandaren mage and her dragon turtle mount.

Turtle mounts are mounts that can be obtained by both the Alliance and Horde. Dragon turtles are used by the pandaren as their racial ground mounts.

The pandaren have long sought mounts that embody their values: patience and strength. With a naturally armored hide, even gait (no matter how heavy the passenger), and the relaxed attitude that welcomes long journeys, the Dragon Turtle is perfect for the pandaren adventurer. Indigenous to mainland Pandaria, these fine steeds are easily outfitted with the essentials: maps, cushions, footstools, and brew-storage. Comfortable and hardy, the dragon turtle's slow, even stride will gently ease passengers into new parts of the world and/or a relaxing nap time.[1]

These mounts give a 60% speed increase on land. You can purchase these mounts from

Old Whitenose <Dragon Turtle Breeder> near the Eastern Earthshrine in Stormwind City, and

Turtlemaster Odai <Dragon Turtle Breeder> at the Pandaren Pavillion in the middle of the Valley of Honor in Orgrimmar, so long as your character has riding skill of 75 (obtainable at level 20).

These mounts give a 100% speed increase on land. You can purchase these mounts from Old Whitenose and Turtlemaster Odai so long as your character has riding skill of 150 (obtainable at level 40).

Riding Turtle is gained by using a code from specific cards from the World of Warcraft Trading Card Game, or also obtained through the Garrison's Level 3 Fishing Shack.

Sea Turtle is rarely fished up from Northrend and Cataclysm fishing pools.

Arcadian War Turtle is purchased from Xur'ios in Dalaran for 150 Curious Coins.

Vicious War Turtle is purchased with a