The Twilight Grove sits in the middle of Duskwood and contains an unnamed great tree. It has a surprisingly night elven feel to it, and could very well be sitting dead in the middle of Ashenvale as opposed to in the middle of human lands. It is home to one of the four portals to the Emerald Dream, and was once guarded by the green dragons of Ysera's flight. The great tree was planted by followers of Fandral Staghelm from one of Nordrassil's branches in order to stem the tide of saronite seeping up from the land.[1]

The Twilight Grove also contains a moonwell. The other three portals are in Feralas, the Hinterlands, and Ashenvale.

4,500 years before the Dark Portal, Fandral and his followers secretly cut six enchanted branches from the boughs of Nordrassil. With the branches in hand, they traveled the world to locations where saronite blooms had sprung to life, including a remote region of the Eastern Kingdoms that would later be known as Duskwood. The branch quickly took root, and became a new tree all its own, acting as a conduit and channeling the powers of the Emerald Dream into the waking world, strengthening the nearby wildlife and scouring the saronite deposits.[1]

While the Emerald Dream suffered under the corruptions of the Emerald Nightmare, Twilight Grove was guarded by the Dragons of Nightmare.

The Dream Portal becomes active for druids, providing access to the Emerald Dreamway.

The druid hero meets up with Valorn Stillbough and Belysra Starbreeze, sent by Tyrande Whisperwind, at the moonwell here to acquire the Scythe of Elune.[2] A Dark Rider named Ariden ambushes the meeting, killing Valorn and making off with the Scythe,[3] the druid following in close pursuit.

When the Dreamway falls to the Nightmare, Lumbering Mindgorgers begin pouring out of the portal, threatening the surrounding area. Heroes fighting the Dragons of Nightmare will come here to defeat these aberrations.

During the Fourth War, Vassandra Stormclaw performed a ritual to summon Goldrinn through the dream portal. During the ritual, multiple lupine spirits attacked from the dream, until finally Goldrinn appeared. In response, the wolf god then provided Tess Greymane a vision, in which she relived the fall of Gilneas as a worgen.[4]

In the aftermath of the Fourth War, Mathias Shaw and Flynn Fairwind visited the grove before going to Raven Hill Cemetery. They returned here after stealing the Torch of Holy Flame from the necromancer to purify it in the moonwell, and used it against to save Darkshire from her undead army.[5] 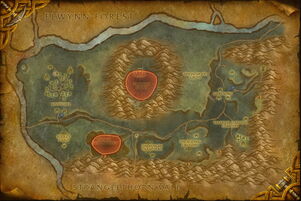 The Twilight Grove is a night elf archaeology dig site.

The Twilight Grove and the great tree within may be the reason that Duskwood, while under the same curse that befell Deadwind pass, still teems with life despite the lack of sunlight. The tree itself was planted to purity saronite deposits in the area and continues to thrive despite the shadow curse, presenting a resilience to shadow overall. In addition, the great tree serves as a conduit between the waking world and the lifegiving energies of the dream, likely contributing to the appearance of the Twilight Grove.