Twilight of the Gods (WC3 NightElf)

This article is about the Warcraft III mission. For lore about the battle, see Battle of Mount Hyjal. For other uses, see Hyjal (disambiguation).

Twilight of the Gods is chapter 7 of Eternity's End. It was the battle in which the Horde, the Alliance, and the Sentinels joined forces to defeat the armies of the Burning Legion and the Undead Scourge. This final battle is known in lore as the Battle of Mount Hyjal.

The battle is the final mission in Warcraft III: Reign of Chaos. It is also featured in World of Warcraft: The Burning Crusade in the Caverns of Time as the Battle for Mount Hyjal.

The next morning, near Hyjal Summit.

The night elves, orcs and humans gather to plan their defense of the mountain... 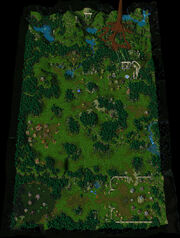 After being guided to Kalimdor by Medivh, the Orcish Horde led by Thrall and the Alliance forces led by Jaina Proudmoore had come into conflict with each other and with the night elves of Ashenvale, led by Malfurion Stormrage and Tyrande Whisperwind. Acting as a peace broker, Medivh was able to unite the warring factions to defend the World Tree, Nordrassil, from the Burning Legion's assault.

You must attempt to slow Archimonde's ascent to Hyjal Summit by throwing everything you can at him and his elite forces. By doing this, you will buy Furion the time he needs to implement his mysterious plan for the World Tree's defense. Though many of your brethren may fall, their sacrifice will secure the future of the world itself.

The camera sweeps over the night elf, orc, and human bases. Jaina teleports into a meeting with Furion, Tyrande, and Thrall near the human base.

Jaina Proudmoore: I'm sorry I'm late. It's just as we feared. Archimonde and his doom guard are making their way towards the summit! He'll be here any moment.

Furion Stormrage: Ten thousand years ago we night elves defeated the Burning Legion. Though the rest of the world was shattered, we were left free to live out our immortal lives in peace, bound to the World Tree.

Furion Stormrage: We are its protectors, and through it we were granted immortality and power over nature. Now, at last, it is time we gave that power back.

Tyrande Whisperwind: You realize that we will age as these mortals do. Our powers over nature will wane in time.

Furion Stormrage: If pride gives us pause, my love, then perhaps we have lived long enough already. I will proceed to the summit and prepare our defenses there. Whatever comes, my love, remember... our bond is eternal.
Furion runs over to a gate and begins some form of summoning spell. At the bottom of the mountain, Archimonde appears.

Archimonde: Hear me, night elves! The time for reckoning has come!

Jaina Proudmoore: If you can provide our bases with support and keep us from being overwhelmed, Thrall and I will delay Archimonde's ascent!

Tyrande Whisperwind: Your plan is a bold one, girl. Perhaps I have misjudged you outlanders. May Elune shine upon you!

Furion Stormrage: To arms, my brethren! To arms, brave orcs and humans! Twilight falls -- and the enemy awaits!

Shandris Feathermoon: Priestess Tyrande, the undead have begun to construct a new settlement! It won't be long before they start attacking our allies!

Archimonde: You are very brave to stand against me, little human. If only your countrymen had been as bold, I would have had more fun scouring your wretched nations from the world!

Jaina Proudmoore: Is talking all you demons do?
Jaina teleports out of her base.

Archimonde: Stormrage! Show yourself! Or do you intend to have mortal girls do all your fighting for you?

Huntress: Priestess, the undead have constructed a new settlement. They are mustering new forces to send at us!

Archimonde: You orcs are weak and hardly worth the effort! I wonder why Mannoroth even bothered with you!

Thrall: Our spirit is stronger than you know, demon! If we are to fall, then so be it! At least now... we are free!
Thrall casts a lightning bolt at Archimonde before teleporting out as well.

Archimonde: The wretched little whelp actually hurt me... Are there none left to stand against the Legion?

Archimonde: This is almost too easy! If I'd known that this mortal resistance would be so weak, I would have launched this invasion centuries ago!

Huntress: Priestess, the undead have constructed a final settlement! They are mustering new forces with every passing moment!

Archimonde: Come, you night elves! Where is the fire and the passion with which you fought so long ago?

Archimonde destroys the night elf base and breaks down the gate.

Furion Stormrage: Archimonde's victory here has made him overconfident. He will not see the trap that I laid for him until it is too late.

Archimonde: At last! The way to the World Tree is clear! Witness the end, you mortals! The final hour has come!
Tyrande runs up to Furion's watching point just as Archimonde arrives at the base of the World Tree.

Tyrande Whisperwind: The outlanders held him back as long as they could. Were you successful in planning the summit's defense?