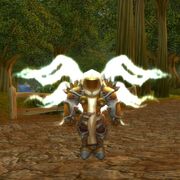 Tyrael in World of Warcraft.

Tyrael's Hilt summons an in-game companion angel, Mini Tyrael. He responds to emotes such as /dance, and was one of the first companions to fly. 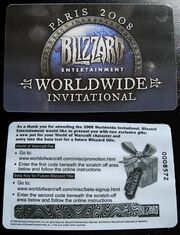 Key card given out to participants

Participants of the 2008 Blizzard Worldwide Invitational in France were given a code that unlocked this pet in-game.

The item can be acquired from the following NPCs by redeeming the WWI promotion codes:

Tyrael's Hilt can still be obtained in-game, provided you have or somehow acquire an unused redemption code.

'I am Justice itself!'