Mr. Chilly is an aquatic companion pet obtained through a promotional event.

Mr. Chilly was mailed by Breanni to players who merged a WoW account to a Battle.net account. He was intended as a "thank you" from Blizzard for sticking through the process of switching over.[1] The first Unhatched Mr. Chilly items were mailed on Oct. 15, 2009[2], three days after Blizzard announced that all WoW accounts would need to be converted to Battle.net accounts on Nov. 11, 2009.

Letter sent with the item:

Please give a warm welcome to your new cool penguin pal!

I'm so happy you could give this sassy little Spheniscidae a home.

Aquatic: Harmful damage over time effects are reduced by 50%. 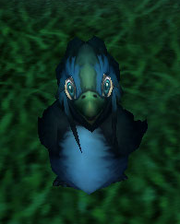