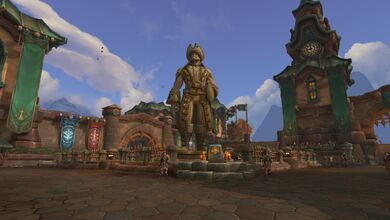 “Let us speak plainly now, and in earnest, for words mean little without the weight of conviction.”

— The Assemblage of Houses in Unity Square[1]

Unity Square is a large plaza located on the south side of the Kul Tiran capital city of Boralus. Sitting just off Proudmoore Keep, the square celebrates the unity of the kingdom's four ruling houses: Proudmoore, Ashvane, Waycrest, and Stormsong. At its center stands a large statue and memorial to Daelin Proudmoore, the late Lord Admiral of Kul Tiras, constructed following his death at Theramore. The square and its surrounding spaces serves as a major meeting place in the city, as well as a location for important ceremonies and addresses.

Unity Square is mainly divided into two sections, consisting of a main square closer to Proudmoore Keep, and a smaller plateau overlooking the bay of Tiragarde Sound. Smaller, adjacent overlooks also connect to the main sections. Paths from the square lead to the Proudmoore Academy, Proudmoore Keep, and Upton Borough in the west, north, and northeast respectively.

Jaina Proudmoore is invested as Lord Admiral of Kul Tiras

After Kul Tiras's defeat at Theramore shortly after the Third War, a large statue of the fallen Lord Admiral Daelin Proudmoore was installed in the center of the main plaza. Memorials to this great loss were held annually, with the ruling houses of Kul Tiras traditionally attending.[2] This service was presided over by Daelin's widow and successor, Lord Admiral Katherine Proudmoore.

At the time of the Fourth War, Katherine Proudmoore would hold a public address in the southern plateau of Unity Square, in which she announced her intention to step down as Lord Admiral in favor of Lady Priscilla Ashvane. The event was quickly interrupted by Taelia of the Proudmoore Guard and an emissary of the Alliance, who brought evidence of an Ashvane plot against House Proudmoore and Kul Tiras.[3] In response, Lady Ashvane detonated a sack of Azerite to cover her escape, while fighting erupted throughout the square between her forces and those of the city guard. Smoke-producing devices were also used to cause chaos in the square.[4] However, launched prematurely, the attempted coup was eventually crushed, and Lord Admiral Katherine survived. Ashvane herself escaped the city, and would continue to wage war against House Proudmoore in what became the Kul Tiran civil war.

Later in the conflict, Boralus would be attacked directly by Ashvane and pirate forces, who breached the city walls. The outer square saw a battle between Hadal Darkfathom and Proudmoore loyalists, with the sea giant ultimately being killed. The southern plateau of Unity Square was heavily damaged in the fighting, with much of it collapsing into the nearby waters. Alliance forces would push through this damage to reach and slay the beast known as Viq'Goth.

In the wake of the Proudmoore victory in the Siege of Boralus, a ceremony was held in Unity Square's plateau, which was repaired following the battle.[5] There, the gathered and recently-reunited houses of Kul Tiras pledged themselves to the the new Lord Admiral Jaina Proudmoore, appointed by her mother. Also in attendance was High King Anduin Wrynn of the Alliance, who was introduced to Taelia, now revealed to be the daughter of Bolvar Fordragon. 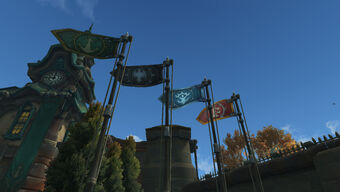