Ursoc is the fourth boss of the Emerald Nightmare.

Ursoc is one of the Wild Gods. Patron of the furbolg, and closely linked to the druidic power of shapeshifting, the ancient great bear has long been a protector of Azeroth. But as Ursoc slumbered at his shrine in the Grizzly Hills, the world around him was plunged into corruption, and he awoke to torment and nightmare, consuming and twisting his being.

Ursoc uses two interacting debuff mechanics that are of special concern to the tanks: Overwhelm and Rend Flesh. Tanks who have stacks of Overwhelm suffer increased damage from the Rend Flesh DoT. In order to minimize tank damage the following taunt schedule can be used: 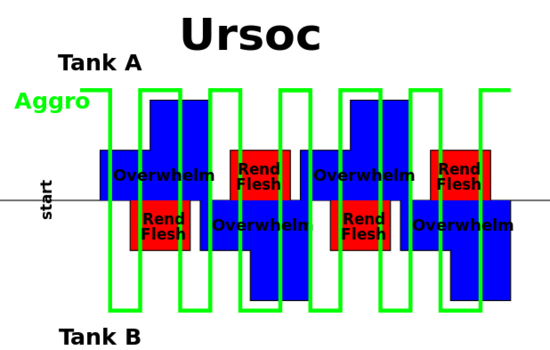 Intro
Ursoc yells: The Nightmare consumes me... compels me... to serve... to kill!
Ursoc yells: My sacred gift from the Watchers! Yes... yes, Nightmare Lord... yes... the fury of the Claws must be mine once more! (Druid Only)
Malfurion Stormrage yells: If you need further proof to see how insidious the Nightmare is, look there! Even the fierce heart of Ursoc has succumbed. Release him, I beg you!

Aggro
You should have fled! Now I'll feed your bones to the storm crows!

Aggro with Claws of Ursoc
I'll rip the Claws from your lifeless hands!

Wipe
Should have fled. SHOULD HAVE LISTENED!

Wipe with Claws of Ursoc
The Watcher's gift is mine once more! No... not mine... it belongs to the Nightmare.

Death
The Nightmare's veil is lifted... I return at last... to the long slumber.

Death with Claws of Ursoc
You have released me from the Nightmare. The Claws... have served you well...

Outro
Malfurion Stormrage yells: Truly there was never a soul more noble than Ursoc's. I pray his spirit finds its way back to the Dream.