Male is a gender in World of Warcraft. The only alternative is a female. Typically, males are often the warriors and more aggressive gender of each race, but this is generally a stereotypical observation. Many renowned heroes are male warriors or paladins such as Anduin Lothar, Uther the Lightbringer, Daelin Proudmoore, Arthas Menethil, and Tirion Fordring. There aren't many noted women in the Silver Hand. Also, many orc warriors are males such as Grom Hellscream, Thrall, and Durotan.

Blood elves, or the ones that used to be high elves, have decided to drop the skills of a warrior and focus on manipulating the ways of the Light and turned into blood knights. The blood elves have not decided to stick to primal warrior powers such as the humans or orcs do but rely to the power and fury of magic which they have so many different classes, some blood elves have actually turned back to the druid state, but of course Malygos has been angered by the magic users especially Dalaran and probably most blood elves.

Most renowned blood elf males include:

Draenei males are the strongest part of the army of draenei, but ever since the exile from Draenor they have lost much of what is their army, the female now play an important role in the defense, of course the males still are more stronger than the females. They are now the new paladins of the Naaru.

Now that the Draenei have spread forth in most places in Azeroth, they have heard of the mighty paladins such as Uther and Turalyon also the warrior known as Anduin Lothar, though the male warriors that have changed to paladins they have wish to studied the paladin trainings these power these paladins wielded.

The most renowned draenei heroes include:

The draenei male paladins do not literally worship the light per say, but they gain their holy powers from the live giving Naaru, they will one day wish to become an invincible army of the Light, the male warriors and paladins must fight off the Burning Legion, fel orcs and Illidan's forces and defend Shattrath City.

Dwarves are great warriors, though there weren’t that many renowned dwarves in history. They are tough short warriors, can fight with great strength, and many branches off the warriors of dwarves, from warriors, mountain kings, dwarven avatars, and dwarven barbarian. Dwarves are similar to Vikings, they were once earthen and stronger than what they are now. They also have mastered taming the mighty beasts known as gryphons the males are great tamers, of course women also join them in warriors to priests.

After Arthas "disbanded" the Silver Hand, they have now decided to allow dwarves into the Silver Hand as master paladins, some have also joined the priest rankings, they are masters now of air combat, ground warfare and magic powers.

Some and few of the most renowned dwarves include:

There were many types of dwarves, though barely any known of the Iron dwarf race in Northrend though some grow in jealous of power, the Dark Iron clan is a good example of the greed of dwarves, yet some like the Ironforge and Wildhammer dwarves will defend against this evil, they have pledged themselves to the Alliance in taking back lands from the Dark Iron clan.

Of course there are not many gnome heroes but most of the males are great. They are the most technologically advanced all creatures except for the naaru and mo'arg. The male and females are great technicians who can repair anything literally and can build almost anything with technology such as the Gnomish Submarine one of their crowning achievement such as their Deeprun Tram, they were great in the Second War, but of course there weren't that many warriors of the gnomish race, but great tinkers, until the day the troggs invaded Gnomeregan.

They're not that many heroes of the Gnomish race except their "lord" or the High Tinker, actually only two but one went corrupted, and know has self proclaimed the "king" of Gnomeregan.

The two renowned leaders of the gnomes and the Leper gnomes are:

Many human males were great warriors of the First War, Second War, Third War, and more. Some have also joined the Silver Hand, but half of the human race has turned to the darkness and either set their own evil paths or follow with the Lich King, Arthas Menethil. Men have also been counted among assassins or rogues, pursuing stealth killing during the wars by assassinating the enemy.

Human males range from lords to deceivers, priests to warlocks, paladins to death knights, where greed can always corrupt the minds of even the most valiant knights and paladins. Arthas is one example of this corruption. Valor, glory, praise, duty, or honor can shape a male warrior into a beloved renowned warrior or paladin; Lothar and Uther were good examples of this.

For night elves the factions that have been introduced are mainly female factions such as Priestess and Mages, but now regrowing in strength, warrior ranks have arisen for males also such as hunters which elves are most elite at, and rogues the elves specially night elves because of their racial ability to meld with the shadows they are excellent rogues, most males have also become Druids and mages, but with priests it sticks with women such as Tyrande Whisperwind. All males were sleeping in the Emerald dream for centuries with Malfurion.

Orc males are the most experienced warriors of all time. With their massive muscles, speed, agility, endurance and immunity to pain, they have been ready for every war except the beginning of the First War. Orc males are also experienced hunters having once lived in Draenor and now have traveled through the Dark Portal to Azeroth, they know the skills of hunting in verdant grasslands.

Even though they are skilled in speed and agility, some have become assassins — despite being massive they stealth well. Most Orc rogues portrayed in the games and art are female. They can blow their cover since most women of the Orcish race did not get grunt jobs until recently nor practiced the magic (besides shamanism). Males are usually the mages, warlocks, shamans but these classes are available to both genders. Ever since the Battle of Mount Hyjal, women have decided to join in glorious combat alongside the hardened Orc males.

Orcs during the time of the Horde and when Sargeras arrived to the Orcs have been, Warriors to Butchers, Shamans to Warlocks, Far seers to Destroyers, Hunters to Assassins, Valiant to Crazy Dire Orcs.

They though have fought as ruthless and relentless and wished to seek to destroy all humans and their allies on Azeroth when they were put into a constant state of aggression and violence caused by being cursed by Mannoroth's blood. Now they have returned to their shamanistic heritage and seek to not destroy all life but to live in harmony with others, but so far they must fight to protect that. 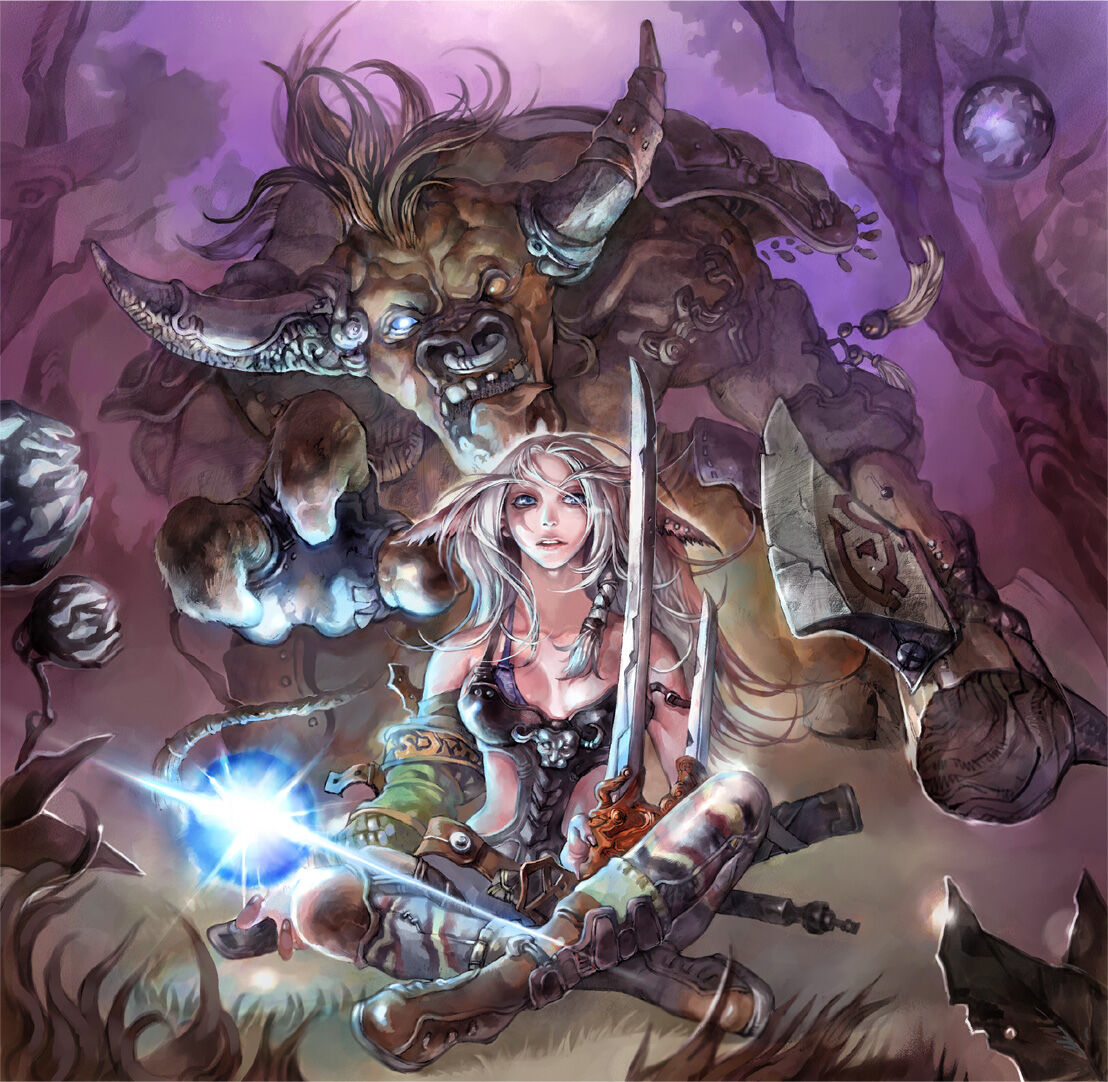 Tauren have always been a life of strength, and power the male was large, though they didn’t treat the females badly, the males were great warriors, and hunters they collected food for the tribes, now unified under one banner by Cairne Bloodhoof, the males are also great at shamanism but after the War of the Ancients the Tauren shared the druidism with the Night Elves.

They are hardy warriors being able to also tame the mighty Kodos and with the massive warfare with them being hunted by the Centaur warriors, Tauren now allied with the Horde they were able to slaughter the Centaur forces.

The most renowned of the Tauren include:

The tauren care for an entity known as the Earthmother, they are angered at the races that have destroyed the lands, such as the Undead Scourge, the Burning Legion, etc. and the males that are druids and shamans intend with the shamans of the orcs plan to heal the land one day, just like they did to Nagrand, the males are the great leaders of the tauren and are chieftains of all the tauren tribes.

Troll males are the main warriors of all of this ancient race, of course they are not just the hunters, males literally spread over all the classes, the only women that take up the troll classes are voodoo priests, or Mages. Male Trolls take up the Warrior, Shaman, Mage, Priest, Rogue, Hunter. Though after the Troll Wars none of the male chieftains were able to regroup, until the mighty chieftain Zul'jin.

The Troll males are the fierce and brutal warriors, they are also assassins known as the Troll head hunter which picked off many enemies, the masters of the Head Hunters are the Darkspear Tribe.

The most renowned trolls include:

The Undead male of both the Scourge and the Forsaken are just the reanimations of the fallen soldiers of the Horde and Alliance. They resemble their counterparts when alive, and most males keep to the ways of warrior, rogue, or warlock. Some are known to do magic training of the mage. Most female stick to the ways of the Priest or Mage, only few join the ways of the warrior and rogues with the males.

Of course the paladins that are killed in action and then reanimated become Death Knights or Necromancers, who could raise armies of the dead for the Lich King or Sylvanas Windrunner's use.

The few renowned undead males that are in the Scourge or Forsaken include:

Not only are the undead members of the Scourge and Forsaken, but there are some ancient dead still alive like the mighty Death Knight Teron Gorefiend. Teron now is the Death Knight of the old Horde reanimated by Gul'dan. The males are mainly the only to be reanimated by the Warlocks, Necromancers or Dark Priest. The men are the tougher part of all races, yet the women are usually priests of the undead.

The following non-playable races are represented with models of both male and female gender:

The following non-playable races may have females in lore, but appear as models of solely male gender:

The following non-playable races are represented with models of solely male gender:

The following non-playable races are of solely male gender in lore:

So far, although there may be males in lore, the following humanoid races (or sub-races) appear to have no male models in World of Warcraft:

There could be explanations for the absence of male models, but unless lack of sexual dimorphism is explicitly indicated, these races could have female models.