This user "Fandyllic" prefers to use the enhanced profile.

Don't let the smile fool you...

...but how can you not love that smile?

Mac gamer (yes, we do exist), but like most other schlubs has to use a PC at work (although I must say, I have a pretty nice IBM ThinkPad). The only other MMORPG he has played before World of Warcraft is the hardcore, PvP game Shadowbane and found it lacking. Never played Everquest, for some reason.

I was one of the Crazy people on WoWWiki. I think this is a good thing, but one can never be sure... ;-) 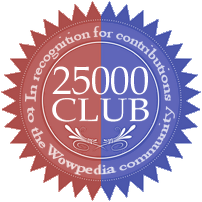 For my own use, but you can look at my sandbox or sandbox2, if you like.