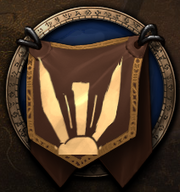 Ancient Guard is an Alliance guild located on the Kirin Tor (US) RP server.

Founded in 2006 by Shadownight, the Ancient Guard is one of the most popular and long-standing casual Alliance guilds on the realm. Despite one or two RP-like traits (e.g. swearing an oath for permanent membership), Ancient Guard is not a role playing guild.

Ancient Guard is a casual guild. Usual guild activities include leveling, questing, dungeons (both regular and heroic) and social events. Guild-based PVP battlegrounds and war games also occur on a less frequent basis. Once in a long while the guild members will get together to run an older raid for fun and achievements. The guild does not have a progression raiding team, but also does not discourage its members from progression raiding with other guilds or players if they so choose.

Ancient Guard prides itself on the guild's friendly and welcoming atmosphere, its good reputation on the realm, and on the strong bond that exists between its members.

Ancient Guard has certain expectations for its members. Kindness and consideration for others (both in and outside the guild) and acting in a mature way are strongly encouraged. Collaboration between guild members is also strongly encouraged. Deliberate rudeness, lack of consideration for others, and deliberately instigating drama are frowned upon and are not tolerated.

The guild has a lenient inactivity policy (a popular guild saying is "real life comes first"), and accepts both adults and children - although players under 16 typically require a parent or guardian to also belong to the guild. The guild enforces a PG13 language level in guild chat.

New members are given the initial rank of "Potential". This rank does not have access to the guild vault, but does have access to guild chat. Once it has been established that the Potential member and Ancient Guard are compatible, the new player swears an oath and fills out an official application on the guild's Web forum, and is promoted to the rank of Cohort. Further promotions are given over time and based on the judgement of the guild's leadership.

For more information, and to view the Guild charter, visit: http://www.ancientguard.com/AG_Home.htm

To join Ancient Guard whisper or in-game mail the GM or one of the officers, or apply via the guild's forum (a forum profile will need to be created first): http://ancientguard.19.forumer.com/viewforum.php?f=12

All of the following members of the guild leadership are able to invite new members.