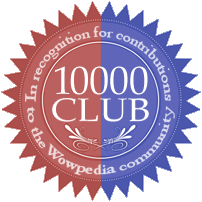 "They say that 'he who flies highest, falls farthest' - and who am I to argue? But we can't forget that 'he who doesn't flap his wings, never flies at all'. And with that, I'll stop trying to convince myself that I can't fail; how dull the whole thing would be if that were true."

My name is Joshua Underwood (alias Joshmaul, born June 5, 1987), and I live in Holbrook, Massachusetts (previously in Lowell, and before that, Poway, California). I began playing World of Warcraft on September 6, 2005, and I love when people try to harass me by making articles that insult me, and mess with my user pages making fun of my weight, the fact I have no life, so on. It proves my intellectual superiority over such individuals, and their jealousy at my godliness. Kneel before Joshmaul, mortals. *grin*

I have beta-tested all of the expansions except for Cataclysm. I won a BC beta key from Stratics on November 17, 2006, and on August 28, 2008, my stepfather gave me the key he had won for WotLK. No luck in Cataclysm, but I made up for that by PTRing Patch 4.0.3 and ordering the Cataclysm collector's edition. I beta-tested MoP as an annual pass holder starting on March 30, 2012, and subsequently bought the Digital Deluxe Edition. I pre-ordered the DDE for Warlords of Draenor, and subsequently entered the beta test for that on August 19, 2014; I then pre-ordered the DDE for Legion, and entered that beta test on May 12, 2016. I pre-ordered Battle for Azeroth when it became available on January 30, 2018, and was invited into the alpha test (a first for me!) on March 23. I preordered Shadowlands at BlizzCon 2019, and was invited into the beta on August 20, 2020.

I retired for a period from WoW as of March 31, 2013, and (after two free weeks in the interim during the summer) returned on December 7.

These are all the important heads/parts I've taken from instance bosses, major quest givers, so on:

The legendaries I've picked up (so far), and who with, or the progress I've made on others: