The Blackrock Clan (Guild) is an All Orc Clan on the Emerald Dream (RpPvP) server. Upholding the old traditions of the Dark Horde with its loyalty to the Black Dragonflight and the Burning Legion. They have been seen around the Altar of Storms sacrificing infants and cannibalizing trolls and orcs.

For years, the clan was on the server Ravenholdt (RpPvP)

However, many other members of the clan, who were captured and being held prisoner in the internment camps, joined the modern Horde under Thrall when he freed them or were part of the portion still loyal to Orgrim Doomhammer. He was a mentor to Thrall, and the orc capital of Orgrimmar was named after him. Regardless, the Blackrock orcs in the New Horde don't seem to have maintained a strong clan identity unlike their cousins within the Dark Horde. They appear to see themselves firstly as Horde orcs and only secondly as Blackrock orcs.

Aftermath of the Third War 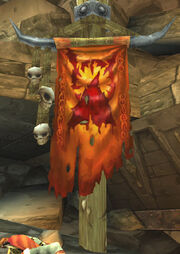 Currently, the Blackrock clan still mainly resides in and around Blackrock Spire under the leadership of Rend Blackhand, where they war with the Dark Iron dwarves for control of the area. Their holdings also include territory in the Burning Steppes and the Redridge Mountains. They have formed the Dark Horde and have become a dire threat to nearby towns like Lakeshire, whose defenses are severely strained against their raids. It has also been rumored that they have allied with a group of black dragons led by Nefarian, Deathwing's son. They are but one of the pawns Nefarian is using to undermine the human kingdom of Stormwind.

After the fall of Telmor on Outland, Gul'dan offered the former draenei city to the Frostwolf Clan, but Durotan refused and decided to stay in Frostfire Ridge. The Blackrock clan, however, began living in the town, and many of the orcs began using draenic cloths and robes as everyday clothing, melding the unique style into their own culture.[1]

A Blackrock orc in Burning Steppes with green skin

Rend's faction Blackrock orcs have a dark gray skin because they had spent years without seeing the light of day, dwelling deep inside Blackrock Mountain.[2] However, in Warlords of Draenor the Blackrock NPCs appear to have gray skin, which would make it a natural identification of their clan. It is possible that this has been retconned. It is also possible the grey skin from the Blackrocks came from mining in Gorgrond.

Factions of the Blackrock Clan

As one of the largest orc clans and the polarizing issue of leadership between Orgrim and Blackhand as well as their respective heirs, there are multiple factions of the Blackrock clan with different allegiances.

The Faction loyal to Orgrim remained with him fighting against the Internment camps or were in the interment camps themselves. As Thrall was chosen as Orgrim's heir, this Blackrock faction would join the New Horde.

The Blackrock orcs loyal to Blackhand or interested in Demon Worship would combine with the Black Tooth Grin Clan under Rend, eventually teaming up with Nefarian of the Black Dragonflight.

A third group of Blackrock orcs was introduced when Garrosh recruited former members of the Blackrock clan who served under Rend and Nefarian. 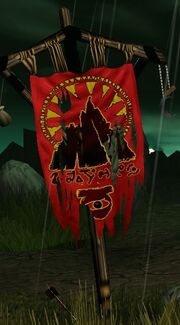 The Blackrock banner as seen in Warcraft III menu.