Thank you for your uploads, but if you would please crop the images before uploading them as per WP:IMAGE, that would be great.

Yes, the page it's trying to look at requires a {{npcbox}} to function, if the page does not contain one (or if the page doesn't exist) it doesn't know what to show, causing the error. What npc page isn't working correctly?

Red links mean the page doesn't exist, and with no page existing the error occurs.

It was linking to a page that didn't exist, the name was misspelled, but thats fixed now. --

Actually Coobra isn't on the WP:BETA list, so I don't think he's there (unless he forgot to add himself). He's propably just good at picking up wrath info from other sources. To answer your question, there's the Sunreavers.

What more do you need? Well, it needs to be specifically mentioned through some official source, for one.

I'm just following what I've seen and been told. I won't remove Saltheril if you put him on there again, but don't say I didn't warn you if someone else comes along and says/does something about it.

Categories are made in the plural tense. Please see WP:CAT.

If you find anymore images that are having issues, please use {{Problem}}. This way if I'm not around someone else can take a look at it.

What armor is this in the picture? 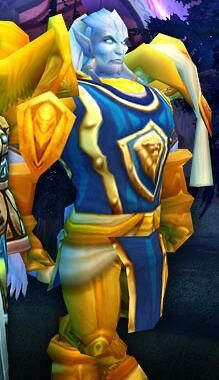 I thought perhaps uppercut would be used for players in the future, Curse of Thorns perhaps for druid magi's and earthgrab totem is used by a boss. TherasTaneel (talk) 00:25, 5 July 2009 (UTC)

If it gets used in the future it can be made then. As for boss abilities... we try not to make pages for them either.

Have you actually tamed one? Know someone who has? I don't hold that "it had Hunter Pet category" on it to be a strong indication that someone's actually tamed one. Still, I can't disprove it either. --Eirik Ratcatcher (talk) 22:35, 15 July 2009 (UTC)

I haven't done that quest myself on my hunter, when I get around that way I'll try if they can be tamed unless someone doesnt beat me to it. I just added the comment based on the indication on wowhead. Should perhaps be removed for the time being? or...added to the talk page. TherasTaneel (talk) 22:56, 15 July 2009 (UTC)

You're doing a good job with adding images to many of pages without, but could you not replace the screenshot stub with a mob stub, if theres nothing missing from the page. Keep up the good work,

Aye, its mostly guaranteed that the health is wrong for any mobs before Wotlk, since addons and such handled getting health amounts back then. It was only recent that Blizzard actually provided that info to be seen without mods.

Personally I would love to remove things like that, not sure if we should... You should bring that up in the forums and see what kind of response you get.

When you move an article due to it being misspelled please remember to to fix the articles they were linked on to the new correct spelling, before marking the redirect for deletion. Otherwise redirects are good.

How does one find out if an article is linked in another? Only way I currently know is to read through them all, and there must be a better way. TherasTaneel (talk) 20:42, 22 July 2009 (UTC)

I dont quite get the reason for not deleting Bipp Gizzitor which have been move to his correct spelling Bipp Glizzitor, could you elaborate? TherasTaneel (talk) 20:51, 22 July 2009 (UTC)

Primarily, you want to transfer all links to page X to page X' before you delete page X... --Eirik Ratcatcher (talk) 20:56, 22 July 2009 (UTC)
Fixed that for ya. Bipp Gizzator (not Glizzator) now safe to delete. (Talk pages can be ignored, often, when fixing links. Especially when it would render the conversation incomprehensible!) --Eirik Ratcatcher (talk) 21:00, 22 July 2009 (UTC)

Hi, TherasTaneel. I want to tell you to not add the category Illidari to articles that aren't confirmed. For example, Vashj is never called Illidari. Thanks. Benitoperezgaldos (talk) 02:00, 23 July 2009 (UTC)

Don't worry. Just note that Illidari appears to be the forces under Illidan himself; while Illidan's forces appears to be it's entire army (the troops commanded under Vashj herself, Kael'thas himself or Kargath himself). The most convenient is to check if the mob is called Illidari, is surrounded by Illidari or if it is said in a quest that it's a Illidari. I've reverted the ones that aren't confirmed to be Illidari, so you don't have to worry.
And also cool job you are doing with all the mobs and NPCs, keep it up :) Benitoperezgaldos (talk) 02:09, 23 July 2009 (UTC)

It's great that you add missing pages, but when you do, could you please add an |image = (insert mob/npc name).jpg in the npc-box and while you are at it give them a

Thank you for giving me this advice, but what exactly do I put for external links? Like where do I find the id-number? Please be patient, I'm not the most skilled at this.>—The preceding unsigned comment was added by Skulkerart (talk · contr).

You are welcome, I'm not anything near an admin I'm new to this too, so for more specific questions you might need to ask them, but I'll help you if I can. Well, first of all remember to end your post with Skulkerart (talk) 02:24, 24 July 2009 (UTC) then one can see who have written the post. I dont know if there are an easier way to get the id-number, but I usually use www.wowhead.com or www.thottbot.com to get their id, its usually seen in the http-link. TherasTaneel (talk) 02:13, 24 July 2009 (UTC)

It looks like we are adding images at the same moment. I will leave it to you. Rolandius

Oh it must be late there. Okay, I will try to look out for any image requests. Good tag team editing though. See you soon hopefully. Rolandius

It seems you are uploading thumbs instead of the original ones, this makes the images alot more blurry than need be, remember to click the image first before copying. As for your current project with adding mobs, a licensing as such would do. Please name your uploaded images with something that is relevant for the content. You can always read through WW:IMAGE for more info. Thanks. TherasTaneel (talk) 22:01, 24 July 2009 (UTC)

While yes he was in the wrong by adding his user name to all the images he uploaded, WP:IMAGE is just a guideline, and fixing it wouldn't have been worth the effort. For each one you would have to upload under the new name, correct to the new name on the articles, then mark the old for deletion, where later it would get deleted by an admin. Four steps for such a minor change. While I thank you for wanting the images named exactly the same as the mob it really wasn't necessary to do want you did. Now, I only say this in hopes you don't fix images' names that lack a space (example: MurlocForager over Murloc Forager). =P

Naah, I know, it just started to annoy me, and as I had started allready I could just as well finish it.

It makes it easier to add the images to other pages or upload a better version, so lets hope they will be used some time in the future; But no, I'll leave those ones out that miss spaces, heh :) TherasTaneel (talk) 00:00, 25 July 2009 (UTC)

I'm considering making an entire page simply for the Dar'Khan Drathir boss fight in Deatholme. As you may or may not know, his page is mostly comprised of Lore with only a short paragraph about him in WoW. Giving a seperate page seems like a good idea to me...

Separate pages for the strategy for a boss is not necessarily a bad idea in any case. But particularly when there is a lot of lore available. Go for it. --Eirik Ratcatcher (talk) 19:51, 27 July 2009 (UTC)

I'd like to thank you for going through the images and adding licenses, but you're currently in the wrong. Mob/NPC --> only from mobs/NPCs in-game. If they are from WMV they should be in the model viewer category. File:Red drake.jpg is from WMV, keep it in the correct category.

sadly not, Kaletam (talk · contr) seem to have a US Bladefist server-user template on his user-page, but can't find it elsewhere. TherasTaneel (talk) 22:24, 27 August 2009 (UTC)

I am a little confused - he has {{User Server|Bladefist|US}} this is on the Template:User Server/Servers list (you have to click on the button to put the names in alpha order) to see the name of the server in alpha order. If you are wanting to change the images or colors:
-- (M o r p hJames E. Rooks, Jr. aka: Morph
Morphgnome & Morphdraenei | C | TLeave me a message on my Discussion/Talk Page)