Not to be confused with Vectus.

Vectis is a boss in Uldir.

The plague of corrupted blood killed countless trolls and began one of the most terrifying periods in Zandalar's history. The constructs within Uldir studied the disease in search of a cure, but found that only isolation and extermination was effecive. Unfortunately, as the facility's safeguards cracked apart, the plague was accidentally combined with a sample of G'huun's blood, creating a new entity that hungered for fresh victims. 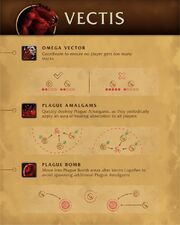 Overview of tactics for the Vectis fight.

Stage One: Probing its Hosts