"But most of all I have come to learn what Malfurion himself no doubt knew... what my mother and Mel'thandris understood... That the Scythe is a menace, a cursed abomination, a beacon of death and destruction. A thing that never should have been." 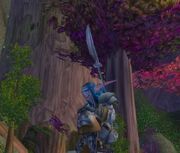 The specter of Velinde Starsong in the Howling Vale.

Velinde Starsong was a priestess and sentinel in Ashenvale Forest who was given the task of clearing the forest of demons. At first, it seemed she had the situation in Ashenvale and Felwood under control, but little by little her efforts faltered. One day, she simply disappeared. Sentinel Melyria Frostshadow was sent to Ashenvale to continue her work. The Sentinels believed that she had her own reasons for leaving, and expected that she could return at any time. Velinde had done much in the past to earn their trust.[1][2]

Frostshadow sent some scouts to investigate the disappearance of the Sentinel and found that Velinde had prayed to Elune for aid on her task. She prayed and prayed as she sought out an answer, and was eventually led to a book in Darnassus, set there by Fandral Staghelm to expose the mistakes of Malfurion Stormrage, that explained the War of the Satyr and the Scythe of Elune, which was entrusted to Velinde's own aunt Mel'Thandris. Velinde made way to the Shrine of Mel'Thandris, where she discovered the Scythe of Elune hidden away. The weapon had the power to weaken the barriers of time and space, and holding the scythe in her hands, she received a vision of chaos. Wolf-men, the worgen, fought savagely, as fit their primitive race, but they faced an unflinching enemy: the satyrs known as the Lords of the Emerald Flame.

It was then that Velinde realized the true power of the scythe. By focusing on it, she was able to communicate with the worgen. However, it was not speech she used to contact them. The worgen heard and understood her. By further channeling the energy of the scythe, the barriers weakened more, and she was able to draw the worgen to Azeroth. She summoned a score and a half. The worgen followed her into battle and, with their brutish strength at her command, they tore into the demons of Felwood.[3]

In the beginning, all was well. She summoned larger numbers of the worgen to fight at her side and she marveled. Though they were of simple mind, they exhibited impressive ability to coordinate their attacks and function as a group.

She identified the leaders in their packs and gave them command of small groups. She then organized her rescued warriors into multiple attack parties, sending them out into the tainted forest to fight the demons.

She waited as her attack parties rampaged through the Felwood, slaughtering the demons in their path. Velinde waited until the appointed time for her soldiers to return came and went; only a few did. She called and searched for the people Elune had entrusted to her. She found not a trace of those missing packs. She returned to her camp, her half-man servants enjoying the freedom Velinde had given them. She lifted her scythe to contact the worgen’s violent home world. There she could bring more to her cause.

But though she had not summoned additional worgen, their numbers continued to increase. It was as though the scythe no longer required her intervention for the summoning process. She gathered as many of the packs as she could find, and ordered them to remain at the Shrine of Mel'Thandris. Velinde hurried to search the libraries in Darnassus and consulted with Onu in Darkshore, but not one scrap of information about these worgen could she find. She heard whispers of a Kirin Tor wizard named Arugal, who was said to have also summoned worgen. Velinde decided to venture to the Eastern Kingdoms and find this wizard in hopes of learning from him.[4] 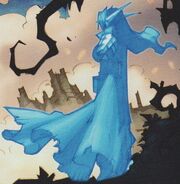 Velinde traveled to port in Ratchet and booked passage to Booty Bay[5] on the Black Osprey. The worgen Alpha Prime was eager to get his hands on the Scythe of Elune. There was also a subject of Alpha Prime's, named Varkas, who coveted the scythe and sought to usurp the power of his master. Varkas struck out with three others who would defy Alpha Prime, and went to intercept Velinde and the scythe. In Duskwood, Velinde realizing she had been followed and went to seek shelter at the mine Roland's Doom but was attacked right near the entrance. After being attacked she fell back into the mine but dropped her torch as the worgen leapt on her. Her torch ignited some nearby dynamite, which brought the mine down killing her.[3]

Her spectre can still be invoked near where the scythe was lost in Roland's Doom. Jitters picked up the weapon, triggering its effect of summoning. The mine was immediately filled with worgen, who then proceeded to rip the men apart. Jitters escaped with the weapon, but was hunted by the worgen across the woods, which were steadily darkening with the scythe's released curse.

In an attempt to rid himself of their chase, Jitters disposed of the weapon near the Yorgen Farmstead, whereupon he encountered the Black Riders from Deadwind Pass. The riders slaughtered Sven Yorgen's family in front of Jitters' eyes. The frightened man then escaped to Raven Hill. The darkness lingers in Duskwood. Yet, the Scythe was found by the Wolf Cult before the Black Riders, the cultists that had the Scythe were hunted down by Brink an SI:7 agent, they then gave it to an unnamed night elf. Now the people huddle in former Grand Hamlet, renamed Darkshire, battling the undead and wolf men who inhabit the murky woods.

The Scythe itself was found by Brink, and given to Valorn who brought it to Tal'doren in Gilneas. As of the Cataclysm, the original Scythe of Elune quest line is no longer doable, and the new quests in Duskwood make no mention of her though her spectre still appears and speaks out in Roland's Doom after clicking a mound of dirt which can be found right next to the quest item for the 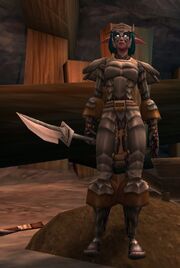 Upon examining the Mound of Dirt, the specter of Velinde Starsong appears:

She could be related to the other Starsongs.