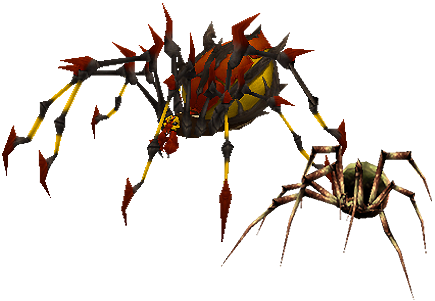 Venom spiders are a type of spiders. They are the size of a human. Its multiple eyes glitter with cunning, and a viscous fluid coats its mandibles.

Long ago, Elwynn Forest was populated with a group of spiders that lived peacefully amid the woods. Yet when the curse fell over Duskwood and turned the once peaceful woodland into a realm of terror, the spiders began to mutate and grow to monstrous proportions. Now, the lurking venom spiders hunt their hapless prey in all of the shadowed corners of the land. Possessing both deadly acidic venom and powerful webbing, these cruel beasts stalk any foolish wanderers who stray too far into the haunted woods.[1]

Venom spiders appear to have a crude cunning, betraying their potential relations to the ancient kingdom of Azjol-Nerub. Heroes who have encountered them have reported a bestial hatred gleaming from their multi-faceted eyes. These arachnids show an uncanny understanding of tactics. For instance, a colony of venom spiders will work together to drive potential prey into web traps. Venom spiders will instinctively use their webs to trap or detain potential prey. They will then drop down out of the trees in which they dwell and use their acidic bite to subdue and kill their victims.[2]