The cunning venthyr of Revendreth are one of the Covenants in the Shadowlands. They feast on the souls of the prideful and vain in a gothic realm of opulence and torment.[1] Joining this covenant means accepting the gift of the Court of Harvesters.[2]

This is where flawed souls are sent who haven't been able to leave something behind, whether it's pride or some other failing. Souls sent here are not quite ready for service in one of the Shadowlands' other domains, and it is the duty of the vampiric Venthyr to prepare them—through unimaginable torment. It is much like a purgatory for souls who need to atone for past misdeeds and shed the burdens of their life. The journey is not an easy one, however. The former sin'dorei prince Kael'thas Sunstrider is one such soul who has found himself in Revendreth for his deeds in life.[3]

Eaters of sin who harvest anima from wicked souls.

The venthyr have a good thing going. They lord over Revendreth’s castles and ceaseless twilight while arrogant souls are delivered to their tables. The harvesters’ otherworldly punishments strip the pride from their thralls, sparing them an even worse fate: eternal torment in the Maw.

But souls thus drained can’t just leave Revendreth for a better place. They have years of penance to slog through while they reflect on the precarity of their afterlives. And, after eons of service, the venthyr are increasingly ruled by their decadence and pride. The very purpose of the plane may be flawed… and those who were once accusers have become gluttonous and corrupt.

Revendreth must always have a master, and rumor suggests that Denathrius, foremost among the venthyr, may no longer be fit for the role. Crowning a new Sire could return the plane to its former glory… or leave Revendreth mired in the same decadence and sin it is charged with cleansing.[4]

The venthyr are aristocratic overseers of souls burdened with excessive pride and wickedness. They guide troubled souls upon the rigorous path to atonement, harvesting anima to keep their realm strong.[5]

If you choose to join the Venthyr Covenant, you'll gain two abilities tailored to the theme of the Covenant. The first of these is the Covenant's signature ability, which is available to all Covenant members regardless of class, race, or specialization. The second of these abilities is specific to your class, and gives you a new spell or power to use in combat.

All Sanctum Upgrades are done through Foreman Flatfinger in the Sinfall Reaches floor of Sinfall.

A transportation network that offers you more fast travel options across your covenant's home zone. Once active, you will have access to additional upgrades.

Reactivate the mysterious network of mirrors that connect across Revendreth. Continue to restore the network to earn the ability to repair broken mirrors across Revendreth that can be used to access secret locations and unique rewards.

The Transportation Network for Revendreth is called the Mirror Network, made up of Blood Mirrors,[6] also called translocation mirrors,[7] and is unlocked through the questline starting with

After completing Rank 3 and the mirror quests, you are given

[60] Repair and Restore, which unlocks Handcrafted Mirror Repair Kits for 10

[Infused Ruby], allowing to fix one time use Broken Mirrors in Revendreth, which lead to Forgotten Chests containing items such as

[Silessa's Battle Harness]. Sometimes entering a mirror transports you to the Sanctuary of the Mad by mistake; when this occurs, simply walk back to the mirror's location and it will still be active and walking through it will take you to the correct room.

The locations of these mirrors change daily. Additionally, the mirrors have thus far been server-region wide (as in, US Oceanic or US Eastern, not "US", see: realm list), and come within the same group. 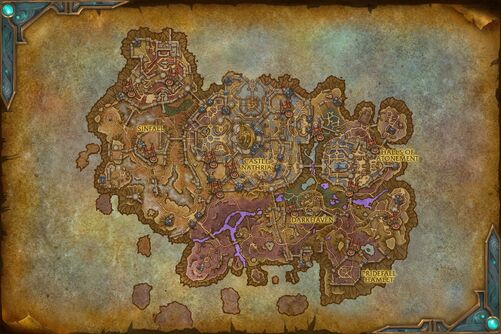 An ancient device that allows you to spend Anima in order to activate bonus content in different areas of your covenant's home zone. Once active, you will have access to additional upgrades.

Restore anima to this powerful and ancient device. Once operational, it allows you to siphon anima to different parts of Revendreth in order to activate new challenges and adventures.

The Anima Conductor for the venthyr is located in the Sinfall Depths (bottom) floor of Sinfall, next to Devahia. Once a location is unlocked, every day anima can be diverted to grant the benefit of the location for 25

[Reservoir Anima]. You can channel anima once per daily reset, but the benefit stays active for a full 24-hour timer. Every 10 channels you can reinforce a location to gain that benefit permanently. Given there are 6 possible locations, it will take a minimum of 60 days and 1500

[Reservoir Anima] to permanently reinforce all locations once unlocked.

When you click on the Greater Greedstone in the Crypt of the Forgotten, a path of sinstones will appear right next to the object leading to a Greed's Reward chest. Sometimes Greedstone appears in the Endmire[62, 45]

inside a tower that also creates a path of sinstones leading to another Greed's Reward chest. Given the Greedstones create both paths for one minute, in theory one could loot both within the same minute. Activating the Greater Greedstone can also trigger a Bleakwood Chest to appear somewhere in the zone, visible in the minimap. Looting the Greedstone will sometimes cause you to get a cursed item, giving you Curse of Renagal's Pact, Curse of Teramanik's Legacy, or Curse of Demoltrov's Rites. These curses can be removed at the Absolution Crypt with Cursebreaker Arnon.

To be able to fight Wanecrypt Hill's Harika the Horrid, you must obtain 1

The Court of Harvesters world quest is

[60WQ] Darkwing Drills, where the more you do the quest, the more abilities your two Darkwing trainees gain.

The possible daily quests with varying rewards for Pridefall Hamlet are,:

The Venthyr enhancements of the Shrouded Asylum granted by NPCs near a statue of Denathrius[21.87, 55.44]

Recruit heroes and troops to send them out on a series of adventures across the Shadowlands Once active, you will have access to additional upgrades.

Restore pride in Revendreth among our forces as we continue to fight for all Venthyr. Recruit companions and troops to send them out on a series of adventures across the Shadowlands.

You can heal your adventurers if they return injured using

A special weekly event that tasks you with throwing a party to impress your VIP guests. Collect the right ingredients and recruit the right staff to impress each week's guestlist! Once active, you will have access to additional upgrades.

The Sanctum Feature of the Venthyr Covenant is the Ember Court, a weekly event where rewards are obtained by raising the happiness of the guests, and organized by Temel.

The Dredger Butler pet can be customized.[8]

The Professionals unlocks the following[9]:

Gregor the Pallidblade (unlocked through the