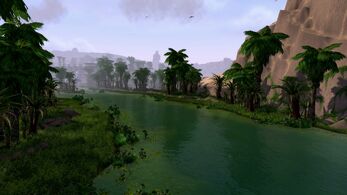 The Vir'naal River is a river that flows through central Uldum. It starts from the Vir'naal Dam and ends at the sea.

In the reign of Pharaoh Tebhotep a plague of serpents struck the Vir'naal River. Nothing could drive away the reptiles. Then, a second plague appeared, this one of desert scarabs. The scarabs fought the serpents until not a one of either creature was left and peace returned to the land.[1]

It was named Nilos River in earlier beta builds, a reference to the Nile River that has served as the main waterway for Egypt (on which Uldum is based) since ancient times.