Voice of the Light

The Voice of the Light (or the Light-That-Needed-Saving)[1] is an entity that is calling to Aramar Thorne in his dreams. It is connected to a compass that was previously in the possession of Greydon Thorne and is currently in the care of his son, Aramar. Malus, having already had a certain history with the compass, and the Hidden, are looking for it as well. It is pointing to crystal shards across the world. 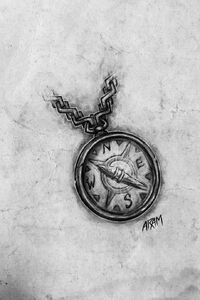 Aram's sketch of the compass.

During Aram's journey on the Veiled Sea and throughout Feralas, the compass was pointing southeast and east, and he thought it was pointing towards Lakeshire.

Thalyss Greyoak gave the following description for the compass needle: "It is a shard of pure starlight from heavens, imbued with the celestial spark. It means the crystal needle is not of this world."

The Voice first called Aram while aboard the Wavestrider, revealing that it needs to be saved. While in Feralas, it appeared in his dreams several times, but Aram felt that he was always turning away from the Voice. When it last appeared, it did not do so in his dreams, but rather it appeared in a vision when he touched the glowing compass' sliver of crystal after the object had forced itself to the ground, discovering a new crystal shard and creating a small crater near the border between Feralas and Thousand Needles.

Upon the end of the vision, he felt that this time, he did not turn away from the Light. Makasa, one from his group, awoke Aram and he told them about the Voice. They decided to continue their journey to Gadgetzan and resolve its mystery.[2]

Upon finding and joining the second shard with the first one, the Voice told Aram that there are seven shards that need to be joined into one.[3] The crystals are a part of the sword called the Diamond Blade which was previously in possession of Malus, but he had betrayed someone and forfeit the claim.[4]

It was eventually explained that the crystal shards (what the compass needle is) of the Diamond Blade hold the essence of a naaru. The naaru lent its grace to shield Azeroth from the Darkstorm. It, in turn, was protected from the nathrezim Highlord Xaraax of the Burning Legion by the Order of the Seven Suns led by Greydon Thorne who was assisted by his brother, Silverlaine Thorne. The naaru bestowed Greydon the Diamond Blade to give to the one he deemed best. However, Greydon kept it for himself, infuriating his brother, who stole the sword and went to defeat the dreadlord. However, the dreadlord convinced Silverlaine to join his side. Upon returning to the order, he killed the naaru, and the weapon shattered, its crystal shards blasting across Azeroth.

Despite its destruction, the naaru's essence survived in the crystal shards and guided, Greydon, and later his son Aramar, and Makasa Flintwill through voices and visions to gather the crystal shards, reforging the blade and fighting the demon lord in his citadel in Hellfire Peninsula on Outland. Deeming the human unworthy, Xaraax took it upon himself to collect the Diamond Blade that was nearing to him with Makasa. What the dreadlord did not expect was that when he started corrupting the blade, his demise would come when Malus took the demon lord's former fel sword and impaled him on it, tossing him into the Darkstorm. The threat of the Darkstorm still present with Malus, Greydon, the young heroes, and former Hidden successfully repelled the demons with Makasa ending Malus' life. With his demise, the Darkstorm withered, and the Blade was safe and reforged, and the naaru preserved.[5]

Upon finding all seven shards, the Diamond Blade was reconstructed.

The Wavestrider and the naaru figurehead.